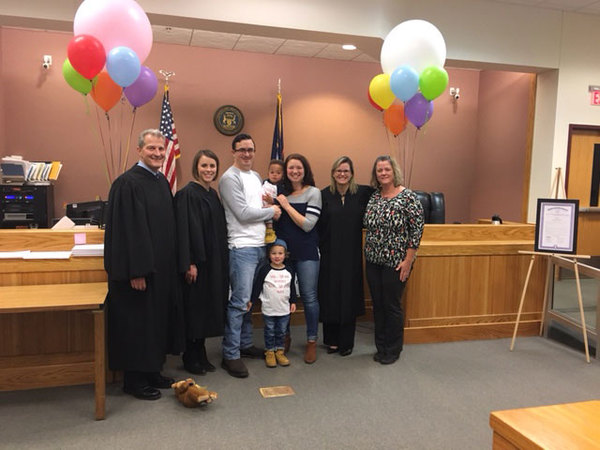 At proceedings in Livingston County Probate Court, five children were formally adopted into four Livingston County families. Today is being observed as the 15th annual Adoption Day in Michigan. State Supreme Court Justice Brian Zahra was the special guest again this year, as he was last year.

Judge Cavanaugh tells WHMI that today’s adoption procedures were a “good, representative group”, adding that the word “family” encompasses many definitions. She says it’s an awesome day that brings families together, noting each brings a different story, history and struggle but everyone is happy and it’s a great celebration.

Erin Russell, who – with her husband Chris - adopted 1 ½-year-old Pauley today – says the adoption process only took eight months, although having to meet with the birth parents can prove to be stressful and pretty nerve wracking.

Justice Zahra says it was a pleasure for him to return to Livingston County, especially since he has a second home at Lake Tyrone in Tyrone Township. In his opening remarks, Zahra said although over 2,000 children have been adopted in Michigan this year, there remain 12,600 kids still in the foster care system. He said the state’s goal in its adoption program is to find a home for every child who needs one. Justice Zahra added that adoption procedures have a special meaning for him because his oldest sister was adopted by his parents. (TT)