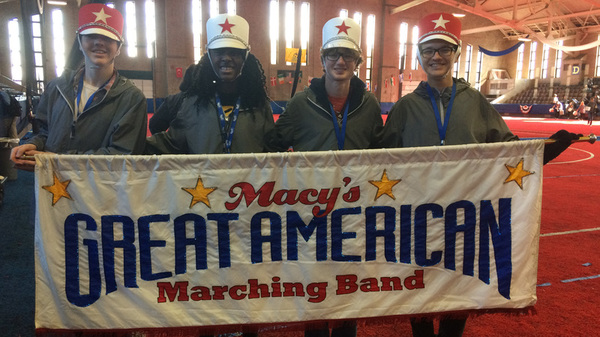 A Brighton High School senior will be front and center of the 91st annual Macy’s Thanksgiving Day Parade in New York City.

17-year-old Jack Newcomb, a BHS Drum Major, will lead the Macy’s Great American Marching Band in the world’s largest parade. 185 of the top high school music students from every state in the union make up the band, including Newcomb, who will serve as Drum Major.

For the past three summers, Newcomb has attended drum major clinics at Eastern Illinois University with fellow BHS Drum Majors. After returning home from this past summer’s clinic, he received an invitation to serve as the parade’s Drum Major from Barry Houser, Director of the Marching Illini at the University of Illinois. Newcomb immediately accepted. He tells WHMI he is humbled to march in the honored position and to be able to represent his hometown and Brighton bands.

Newcomb arrived in New York City Saturday and did some sightseeing with some of the other band members on Sunday. The band’s first big rehearsal was Monday from 9am to 5pm, followed by a student leadership seminar. They will be working with band directors from Auburn University this week as they prepare for Thursday’s event. Newcomb says he’s enjoyed sharing the experience with people who have a common passion. He says he’s also had great exchanges with other band members as they learn about one another and the music opportunities they’ve had. (DK)