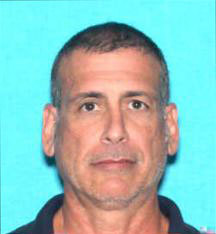 Authorities are still searching for a man wanted for fleeing and eluding after a Friday afternoon chase.

A deputy with the Oakland County Sheriff’s Lyon Township substation was traveling on Napier Road near Ten Mile when he observed a black 2008 Ford Fusion with an expired registration plate and initiated a traffic stop. The driver, identified as 53-year-old James William Sebastianelli, pulled over but before the deputy could exit his patrol vehicle, he made a U-turn in an effort to elude him. The deputy then repositioned his patrol vehicle and stopped Sebastianelli for a second time, who again fled. A chase ensued to west Twelve Mile Road and then east on Grand River until the pursuit was terminated prior to reaching Wixom Road. Speeds never exceeded 55 mph. A be-on-the-lookout advisory was issued and the Oakland County Sheriff’s Operations Center was advised that Sebastianelli had struck two vehicles at Beck Road and Grand River and then fled that scene. There were no reported injuries and officers from the Novi Police Department responded and investigated that scene. His last known address was in Woodhaven but he is believed to be living in the Novi/Lyon Township area at this time. Sebastianelli was already wanted on an outstanding felony warrant for fleeing and eluding police in Lincoln Park and another warrant for failing to appear in court for an obscene conduct/indecent exposure incident at the Lyon Township Walmart. The Sheriff’s Office says Woodhaven Police and Lincoln Park Police have checked his address several times and he has not been located there. Detectives will be continuing with the investigation and additional arrest warrants for fleeing and eluding police are being sought, along with Novi Police for leaving the scene of their accident. Both agencies are currently looking for Sebastianelli.

Anyone with information on his location is asked to call Crime Stoppers at 1-800-SPEAK-UP. There is a reward of up to $2,500 for information leading to his arrest and tipsters remain anonymous. (JM)