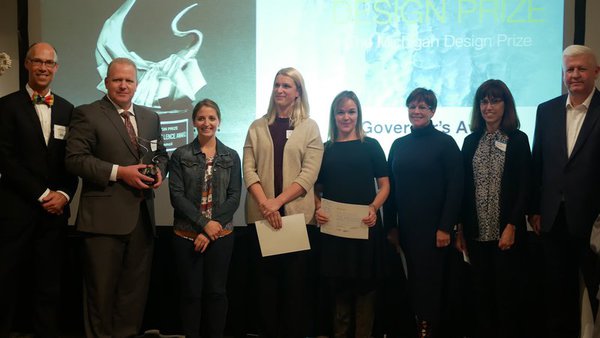 This is the first year that the event has included the Governor’s Award. Brighton Area Schools’ team members, along with district officials, were presented the trophy in late October at the University of Michigan Art Museum in Ann Arbor. The trophy is actually a sculpture, with the Michigan Design Council commissioning a Michigan sculptor to design and sculpt it. The name of the sculpture is “Aspiration”.

In addition to receiving the top team award, four Brighton students scored several individual grand prize winners — all of them elementary school students. They include Cecelia Pruski and Eliot Buchhop, both 4th graders at Hawkins, Isabelle Gronow, a 3rd grader at Hornung, and Smith Christie, a kindergartner at Spencer.

For their efforts, the winning students got a special day with an industrial designer, plus a medal and recognition at the awards ceremony. The Michigan Design Council is a 501(c)3 non-profit organization whose purpose is to promote industrial design in schools across the state at all grade levels, from kindergarten to college. Hundreds of children from across the state participated in this year’s competition. (TT)