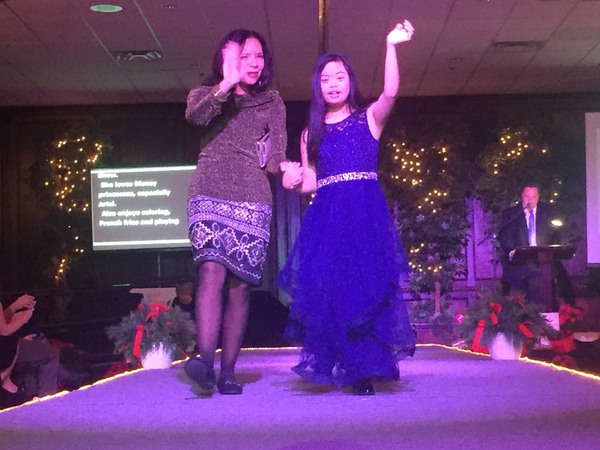 The Arc Livingston’s 24th Celebrity Fashion Show was held at Crystal Gardens Banquet Center in Genoa Township Thursday night. The Arc is a nonprofit organization that advocates for people with disabilities to help them build independent and contributive lives. The money raised at the fashion show allows the Arc to provide services and support to those people and their families at no cost.

At the event, Jeff and Sarah Thomas told their story of what the organization did to help their son Alex, who has a high-functioning form of autism. The Thomas’s wanted guests to know their donations that benefit the Arc, which in turn benefited their son, has made all the difference. The Thomas’s say before they found the organization, their children struggled to adjust, especially in school. They say now, Alex is doing better than ever. The Thomas's report Alex has become a gifted public speaker, Dean’s List ranker, and is in his second year of the commercial aviation program at Western Michigan University.

Before the fashion show began, this year’s Arc Angel Award was presented to Sandy Bader, who was recognized for her many years of dedication to the organization. A performance from the Arc Bell Choir kicked off the evening’s main event, which featured 17 Arc members and 14 local celebrities. One of those celebrities was creator and host of “From Glory Days”, Kurt David, who has participated for the last several years. He walked with an Arc member that he has a personal connection to; his wife’s cousin. David says giving back is the most important thing and the event is the perfect opportunity to do so. Mona Shand of Brighton also walked the runway with her partner Eleanor Grace Malang (pictured).

10-year-old Madelyn Buckley is an Arc member that modeled in the show. She helped auction off a puppy with her celebrity partner Janina Jacobs, an entrepreneur and international golf and travel writer. Madelyn says helping in the puppy auction was her favorite part. She says she had a ton of fun and wants to model in the show again.

The total amount raised at the event has yet to be tallied, but Arc executive director Anne Richardson noted the event had almost 400 guests, adding the community’s support is fantastically overwhelming. Richardson says the fashion show not only highlights the very people they support, but gives those people a chance to share their unique gifts with the community that supports them back. (DK)