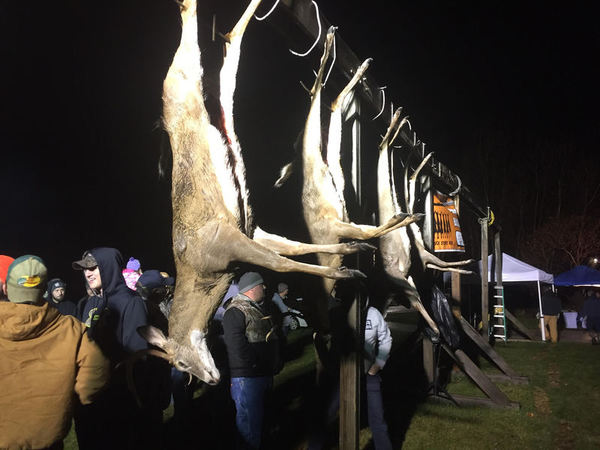 The most faithful of hunters braved the dreary fall elements to gather around the Buck Pole on the first day of firearms season.

The Howell Parks and Recreation Authority’s 10th Annual Buck Pole was held last night on the grounds of the Marion Township Hall. It was created a decade ago in response to a desire by Marion Township residents to have outdoor events that cater to the local hunting culture. Cold weather, rain, and wind meant for a smaller attended event than normal, but eight bucks were still brought in for professional grading. Awards were given in several categories. John Hendee was the highest scoring male with a buck worth 122.5 points. The highest scoring female was Elizabeth Graham who bagged a deer worth 45 and 5/8ths points. The most unique buck belonged to Howell’s Mike Chosid for his 97 and 6/8ths point deer. The youngest hunter award went to 16 year-old Wyatt Daniel of Fowlerville who bagged a buck worth 94 and 1/8th points. Sean Esper brought in the heaviest deer at 176 pounds. And the widest rack award was given to Joe Kujawa whose buck had a spread of 17 and 2/8ths inches. Regular firearm season runs through the end of the month, and while the Department of Natural Resources expects increased success rates across the state, they believe hunters in the southern Lower Peninsula may have a harder time due to stabilized or decreased deer populations. (MK)