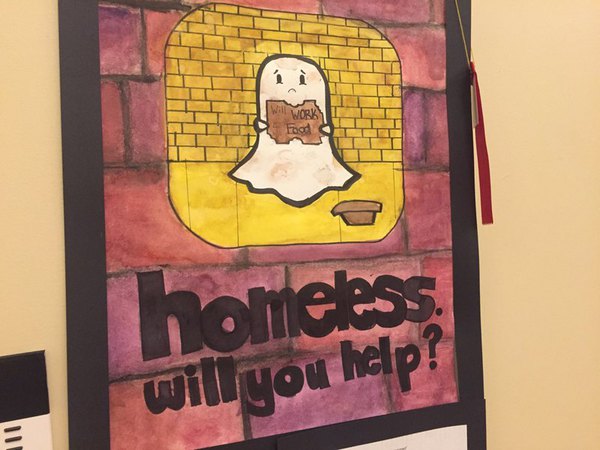 A gathering in downtown Howell served as the main event in the midst of Homeless Awareness Week.

Efforts began earlier this week to draw the community’s attention to the prevalence and problem of homelessness in Livingston County. The central event was held at the Howell Opera House Wednesday and began with an opportunity for guests to view local students’ artwork that followed the week’s theme. The winner of the art competition was Kara Maxwell, a 10th grader from the Bridge Alternative High School in Brighton, who says she was inspired by an encounter she had with a homeless family in Chicago.

Several speakers then shared their experience of being homeless. Among them was 18-year-old Julie who says her mom and therapy was the only thing that kept her going during tough times. She feels many don’t understand what homeless individuals go through and expressed her desire to help those impacted, saying, "No one deserves to be homeless." The second speaker, John, became homeless while still in high school and received help from local agencies. However the teen says more can be done in terms of educating the public. John says it was an eye-opening experience discovering "...how ignorant people can be to things going on in their own community."

A man who asked to remain anonymous says while staying in homeless shelters or his car, he was assaulted, robbed, and harassed. He noted a number of organizations in the area are working very hard to do all they can, but says a major problem is a lack of connection among them and no central location. He also feels governmental bodies are not attacking the problem with the ferocity they should.

Two government officials attended Wednesday’s event; State Representative Hank Vaupel and Howell City Mayor Nick Proctor. Following speaker presentations, Proctor delivered a proclamation recognizing the importance of awareness efforts and the need to support the many people affected. Proctor says the city will “double its efforts to help out in any way it can to bring an end to homelessness."

Jennifer Tate, Director of the Michigan Department of Health and Human Services for Livingston County, provided statistics to prove that homelessness is prevalent even in prominent communities. In 2016, 243 households and 1,003 people in Livingston County were affected by homelessness.

Tate says local agencies are working to spread the word about the resources offered in the community. She says workers have been placed in a couple of schools to assist in that effort. Establishing shelters and supportive housing in the area has been identified as a main priority that would contribute to an ultimate solution. (DK)