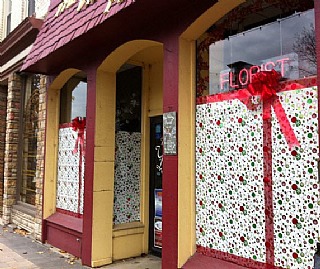 Downtown Milford is being covered in wrapping paper and families are invited to help tear it off tomorrow night.

For the 7th year in a row, downtown merchants will be covering their establishments with wrapping paper for the Milford Downtown Development Authority’s annual Big Reveal. At 6:30pm Thursday a countdown begins that will end with children tearing off of the paper from these larger than life presents. DDA Director Ann Barnette teased that families should come early to pick their spots because you never know what is going to be unwrapped. She said that many of the merchants have entered into friendly competition with each other to see who can come up with the best reveal. In the past, kids pulling off the paper have found displays like a litter of small puppies, Santa Clause, and many other live action figures and vignettes. Barnette says the actual unwrapping only lasts about 5 minutes, but the screaming and giggling from children can be heard throughout the main street area.

The Big Reveal also serves as the kickoff to the DDA’s The Dinner is on Us campaign. During the campaign, the DDA will periodically stop into restaurants in downtown Milford and pick up tabs as a thank you for people coming out and shopping downtown during the holiday season. Barnette said they plan to pick up $1,000 in meals during the Big Reveal. (MK)