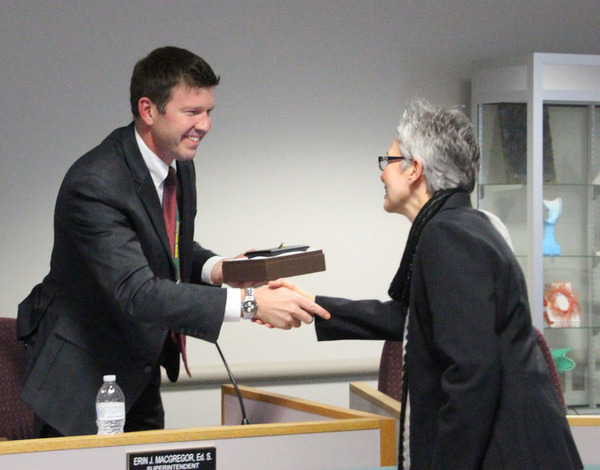 It wasn’t planned, but for a local superintendent, a presentation Monday night was certainly welcome.

Howell Public Schools’ Superintendent Erin MacGregor has been named the 2017-18 Michigan School Public Relations Association Outstanding Superintendent Communicator of the Year. MacGregor was surprised with the award during Monday’s board of education meeting, when Gerri Allen, the association’s executive director, presented the award. Allen says it honors superintendents who demonstrate outstanding leadership in school public relations and communication. MacGregor said he was “humbled and honored” to receive the award, adding that he, “wholeheartedly” believes that engaging district stakeholders opens the door to new and exciting partnerships which ultimately benefit students.

Since becoming Howell’s superintendent in July 2015, MacGregor has launched several initiatives, including “Listen and Learn” sessions as part of a strategic planning process, delivering the first State of the District address and sending a biweekly e-newsletter to parents. MacGregor has also formed a parent advisory committee, started an internal staff blog, began hosting quarterly Coffee Chats with district parents and community members and transitioned each building from a monthly newsletter to biweekly e-newsletters.

Howell High School Principal Jason Schrock credited MacGregor with increasing the level of stakeholder engagement and communication and said that as a district employee and parent of four students in the district, he feels much more informed about the district and his children’s schools thanks to the new communication methods. (JK)