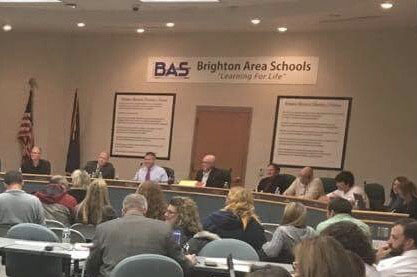 Three mothers of young girls who were sexually assaulted by a male acquaintance, and two of the victims themselves, addressed the Brighton Board of Education at its meeting Monday night.

Two of the girls - one, 13 and the other 14 – recounted their experiences of being sexually assaulted by a student. One is a Brighton High School freshman while the other goes to another area school.

The rapist, a BHS junior, is currently serving a 45-day sentence at the Monroe County Youth Center. That was the sentence meted out by a Livingston County juvenile court referee and reaffirmed by Juvenile Court Judge David Reader.

All three parents of the victims addressed the board as well, imploring the board to permanently expel the offender, who is 16. Outside the meeting room, the mother of the 14-year-old girl said that if the boy is re-admitted to Brighton High, she would pull her daughter out of the school, where she is enrolled as a freshman.

The mother of the 13-year-old said she “would like (the offender) to become a productive member of society,” but maintained that wouldn’t happen “without proper treatment and counseling.” (TT)