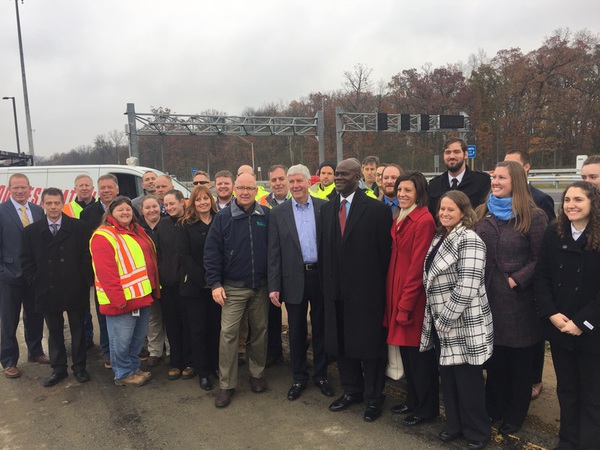 The US-23 Flex Route project that has been in the works for quite some time now was officially unveiled this morning with a ceremony.

After almost four years of planning and one year of construction, the opening of the traffic management system was celebrated at the Northfield Church Rest Area off southbound US-23. Those attending the Michigan Department of Transportation's event were many of the people involved in bringing the $92 million dollar project to fruition, including designers, engineers, and contractors. Also present was State Senator Joe Hune and Governor Rick Snyder.

Snyder says he is a regular user of US-23 and well aware of the congestion along the stretch between Brighton and Ann Arbor. Snyder says the Flex Route system will help Michigan maintain its “…global leadership in mobility."

The Flex Route is used to manage rush hour and seasonal traffic congestion by utilizing the median shoulder as a temporary third lane. Electronic message boards above the “lane” will show a green arrow to indicate the lane is open and a red “X” when it is not.

University region engineer Paul Ajegba describes the project as "The Great Compromise Project", saying the response was mixed when the community weighed in on the best solution for a six-hour traffic capacity problem. Some felt it was better left alone, while others suggested adding a third or fourth lane. Ajegba says adding full lanes would've cost hundreds of millions of dollars and could have affected endangered species located along the corridor. Ajegba says the Flex Route solution is a cost-effective and environmentally-friendly compromise.

In addition to installation of the intelligent traffic management system, the project also included improvements to several bridges, ramp extensions and upgrades, and capital preventative maintenance work. Though the traffic signaling system has officially launched, motorists are advised construction is still wrapping up on small segments of the stretch. A brief video and information related to the project is available at the link below. (DK)