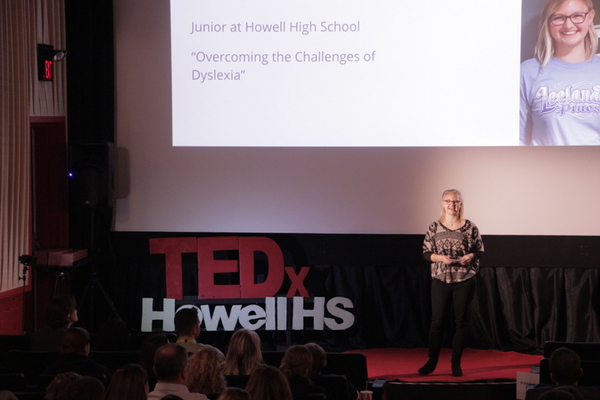 A multi-person presentation in Howell served as a platform for local students voicing their ideas to the community.

A TEDx Talk was hosted by Howell High School at the historic Howell Theatre Thursday. TED is a nonprofit organization that shares ideas globally and TEDx events are talks that are organized independently. The high school’s event included 10 student speakers and one alumnus who spoke on a wide range of subjects. High school assistant principal Brian McCarthy says the goal of the event was to give students a platform to tell their stories and inspire others.

The event was hosted by students Steven Bonk and Natalie Chandler. Chandler says it was inspired by Emmaly Badgett, who spent her senior year at the high school talking about issues that were important to her. The event’s presenters gave their opinions on topics like the applications of nanotechnology, the challenges of dyslexia, celebrating diversity, and cultural perspective.

Senior John Seck shared an encounter with another person that made him realize he was influenced by racial stereotypes. Seck encouraged the audience to think about their daily interactions with others. Jordan Chantaca talked about her involvement in community service and how it has benefited not only others, but herself as well.

Senior Ashley Dunn educated attendees on how geckos have been used to make scientific strides. She encouraged others interested in nanotechnology to find what they love and pursue it. Junior Mikayla Norton discussed how she learned to be a more positive person and why it's so important for people to strive for that as well.

Host Steven Bonk says he was excited to see the event had such a big turnout because it allowed so many community members to hear from high schoolers. He says the talk was a completely different experience because many don’t often get to hear kids speak out and he appreciated the opportunity for them to do so. (DK)