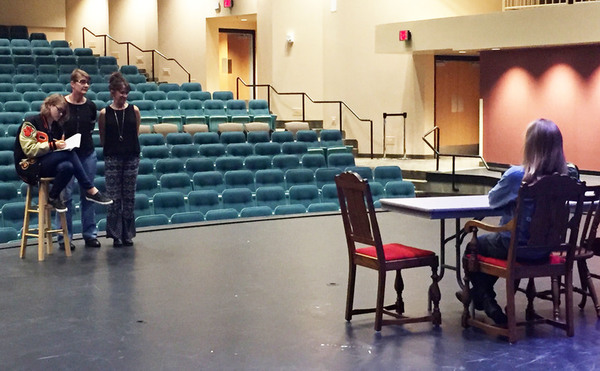 Two women who never planned to be in charge of Brighton High School’s fall play have found themselves center-stage as its directors.

Amy Goller and Betsy Allardice are women who wear many hats. Allardice has been a theater mom for years and has children in the Brighton Area School District, where she also works as a substitute. But when Allardice discovered the high school’s fall play did not have a director and would therefore be cancelled, she unexpectedly added another hat to her collection: the director’s.

Allardice says she originally offered to just be a “warm body in the room” to help make the play happen, but soon found out she’d be taking on much more than that. Allardice contacted Amy Goller, who also has a senior at the high school, and asked her to help direct. Goller has acted professionally and had helped with the school’s play, The Crucible, a couple of years ago. Goller agreed to direct the actors for this year’s play, "The Dining Room", while Allardice is working as technical director.

Goller and Allardice only had eight weeks to pull everything together, though they feel 80% of the play has looked ready to open for several weeks now. Both women agree they make a great team, but Allardice says they wouldn’t have been able to make the show happen without plenty of help from volunteers. She says she's been "blown away" by how many people have offered to help out, including parents, administration, custodians, a shop foreman, and the school’s graphics department.

The play is comprised of 18 different vignettes, all of which take place in a dining room. Allardice and Goller say they've loved working with the cast and crew and are very pleased with what they've all achieved together. The show opens this Thursday at 7pm and runs through Sunday. More information can be found at the link below. (DK)