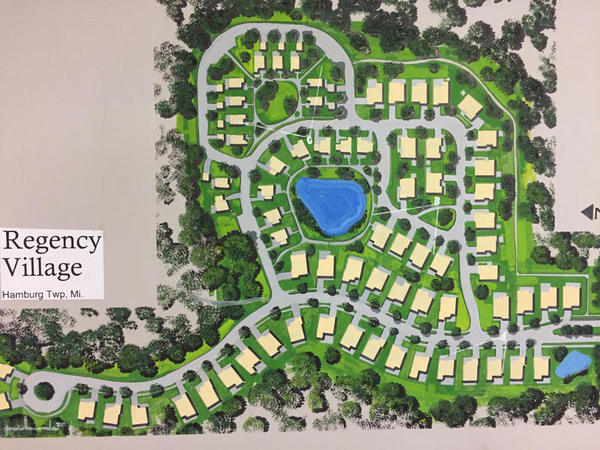 A final site plan for a uniquely structured housing development has been approved in Hamburg Township.

Regency Village is a proposed 70-unit development to be built off of M-36 with Ace Hardware on its western border and railroad tracks on its eastern. Hamburg Township Supervisor Pat Hohl believes this could be a benchmark development for its creating of a community that is anything but “cookie cutter.” Homes will range from 1,200 square foot cottages, to single family homes, to dwellings that will appeal to seniors and empty nesters. In all, the developer said there were five different styles of homes with 19 different floor plans and 43 varied elevations that will make up Regency Village.

In the 3 months following preliminary site plan approval, developers worked closely with the township in creating an architectural control subcommittee. The subcommittee met several times and ironed out details about what they’d like to see and what was realistic with porches, garages, and setbacks. The 70 units will be built on only about 17 of the 52 acres, with the rest remaining open space. In fact, the developer informed the board at Thursday’s meeting that they had reached an agreement with the Department of Environmental Quality to create a conservation easement policy. This means that in the open space there may be no trees removed, no filling, no cutting, and the land will be for public use in perpetuity.

The Board of Trustees voted unanimous approval of the project. The next step before ground can be broken is for a PUD agreement to be signed by the developer, approved by the board, and then sent to the county. (MK)