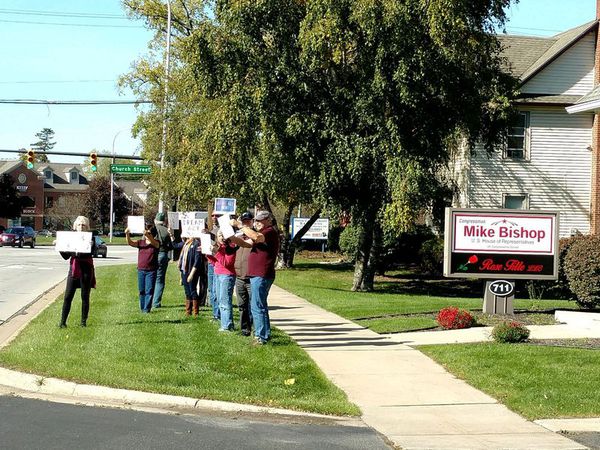 The two events are scheduled this Sunday, November 12th from 2 to 3:15pm and then again on Sunday, November 19th from 1 to 3pm at Bishops Office on Grand River. The protests are being sponsored by various Indivisible groups from Livingston, Ingham and North Oakland counties. The groups have similarly protested at Bishop's office in the past over health care and immigration (pictured). Indivisible describes itself as “a progressive grassroots network of local groups to resist the Trump Agenda.” Organizers behind the protests say the tax plan will “destroy security for working class families” and is opposed by many small business groups, realtors, and home builders as well as advocates of the retired, low income and disabled. Their press release is posted below.

The plan, supported by Republican Congressman Bishop who sits on the tax-writing House Ways and Means Committee, would raise the standard deduction while eliminating personal exemptions. In response to the protests, Bishop told WHMI, "My goal is to ensure this plan delivers much-needed tax relief and lower tax rates across the board – especially for middle-income families. It’s going to give that family of four in Brighton an average tax cut of $2,700, and job creators will be able to write-off new equipment so instead they can hire more of our neighbors. This is about giving all Americans the confidence they need to make their dreams a reality, plain and simple.”

Democrats counter that the plan would sharply lower rates for corporations while phasing-out the inheritance tax and repealing the alternative minimum tax on the highest earners. But Bishop spokesperson Kelli Ford pointed to a Washington Post fact-checker analysis that noted, “Democrats have spread far and wide the false claim that families making less than $86,100 on average will face a hefty tax hike. Actually, it’s the opposite. Most families in that income range would get a tax cut.” Ford said despite inaccurate information being used to push a false narrative about the bill, the legislation, “is about creating a fairer, simpler tax code for everyone.” Indivisible leaders contend it will do the opposite by eliminating tax credits for student loans, health care expenses, and mortgages, while adding $1.5 trillion to the deficit. It originally also eliminated the adoption tax credit, but that was restored in the final version of the bill that passed out of committee. (JM/JK)