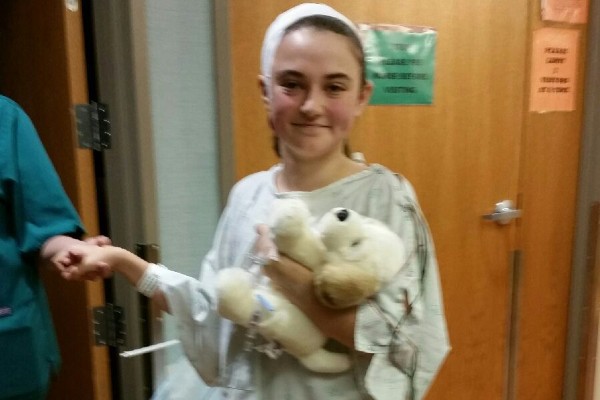 A local family is asking the community for cards and letters to help lift the spirits of their daughter who is battling brain cancer.

In September 2016, then 18-year-old Destiny Coselman of Fowlerville had a seizure, her first one ever, seemingly out of the blue. Destiny’s mother Jodi said that her daughter had occasionally suffered from headaches about once a month but that they were nothing that a couple of Advil didn’t help. What they discovered at the doctor’s was that she had a tumor, grade 4 glioblastoma, one of the most aggressive brain tumors one can get. After the Coselman’s first doctor gave Destiny 1-2 years to live, the family began to seek other help. Now they take her every-other month to the Duke University Cancer Center in North Carolina, where doctors are hopeful that a clinical trial drug will help her overcome her struggle. She recently completed her 3rd and final 8 week treatment and the family is heading down to Duke this week to learn the results.

Destiny’s mother Jodi said that her daughter has lost her peripheral vision, has trouble with eye movement and remembering words and phrases and structuring sentences, but has kept great spirit and never had a “poor me” moment. She said Destiny has been a trooper through all of this and that she is “(her) hero, for sure.”

Jodi said that initially her daughter and family received a great outpouring of support from the community, but now after 14 months have passed, some of the letters and ongoing support that kept Destiny’s spirits up have begun to dwindle. She said she they’ve run a successful crowdfunding campaign and she doesn’t want to ask for more money, but that a Christmas card or a letter to her daughter saying she is still being thought of might be real positive for Destiny. You can send a card to their home address, 10341 Alans Drive, Fowlerville, MI 48836. If you’d like to donate, you can do so through the family’s Gofundme account online. The link is below. (MK)