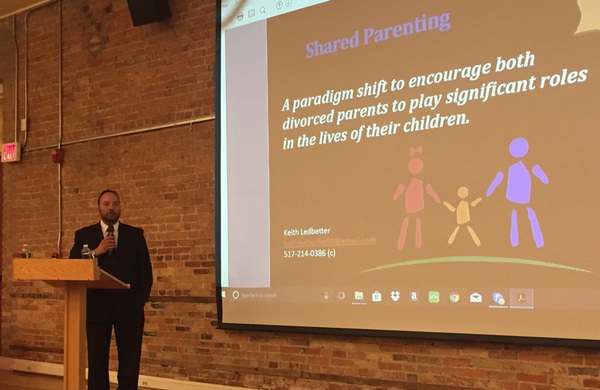 Proposed legislation encouraging shared parenting time in cases of divorce was the topic of discussion at a “Townhall Hearing” in Howell.

The informational meeting was held by the National Parents Organization Thursday at the Howell Opera House. Approximately 70 people attended to learn more and offer input on House Bill 4691, which is sponsored by White Lake Republican State Representative Jim Runestad. The bill would require judges to award joint legal custody of children to divorcing parents, with exceptions such as a parent’s history of domestic violence. It would also prohibit a parent from moving more than 80 miles away from the other parent and gives substantial weight to a child’s custody preference if they’re 16 or older.

Runestad believes a reform of the current family court system is needed, which most of the audience at the Townhall Hearing agreed with in a group survey. Only five attendees said they do not believe the system is broken. Kathy Goetsch was among that minority because she feels the legislation would do more harm than good. Goetsch has been practicing family law for 38 years and questions the effect the bill would have, saying it strips 40 years of law and interpretation. She also questioned the statistics used to support the bill, calling them "horribly flawed".

There has also been strong opposition to the legislation by several child welfare and legal agencies that feel it does not focus on what’s best for the child. However, Howell resident Derek Jaeger feels equal access to both parents is what’s best. He says he’s been fighting for reasonable parenting time for eight years and supports the bill because he wants to spare others from what he calls "parental alienation". Jaeger says, "The problem today is parents aren’t co-parenting, they’re counter-parenting and using children as pawns." Kevin Kossel of Westland attended the hearing and is a bill proponent as well. Kossel says it would give fathers like himself an equal playing field and corrects issues in an outdated system.

Thursday’s meeting was held to garner support for the bill, which passed the House Judiciary Committee and is now on the House floor. Runestad has said he is hoping to move the bill through the full House before the end of the current session in 2018. (DK)