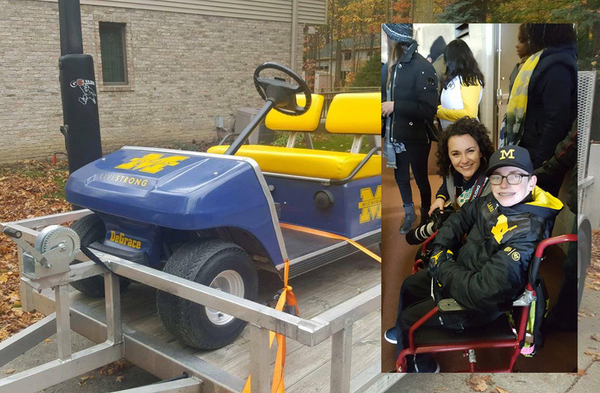 A Marion Township teen who has had 100 surgeries in his 16 years to fix a multitude of medical conditions got a gift on Sunday.

Larry Prout Jr., whose courage and perseverance have inspired students at Pinckney High School and the University of Michigan football team, had asked his mother, Kathryn, for a golf cart. Kathryn put out a request on social media a couple of weeks ago, and Katie DeGrace (pictured in the inset with Larry Jr.) answered. She had been a patient at Mott Children’s Hospital more than a decade ago after being diagnosed with ovarian cancer. Now a nursing student at the University of Michigan who had met Larry during his stays at Mott, she offered the Prouts a golf cart she had received in 2006.

Larry Jr. got his golf cart on Sunday. The only stipulation the Degraces was when Larry Jr. no longer needs the cart, to pay it forward, to give it to another child when the time comes. For the Prout family, the cart is another kindness extended both among parents at Mott but also in the community. Larry’s mother, Kathy, says there were many kindnesses extended when she used to take Larry’s electric scooter to Pinckney High School, where he attends classes two hours per day. Nick Cain and Alex Wasyl, two Pinckney football standouts, would always help her load Larry's scooter in her car. The team adopted him a couple of years ago and made him an honorary team member, just as the Michigan football team did last year.

The golf cart was painted in maize and blue and has both Larry's name along with Katie and her sister's name on the back. Larry took the cart for a couple of spins with Katie and his sister Molly. He says the gift will mean, "freedom and a lot of fun and work." (TR)