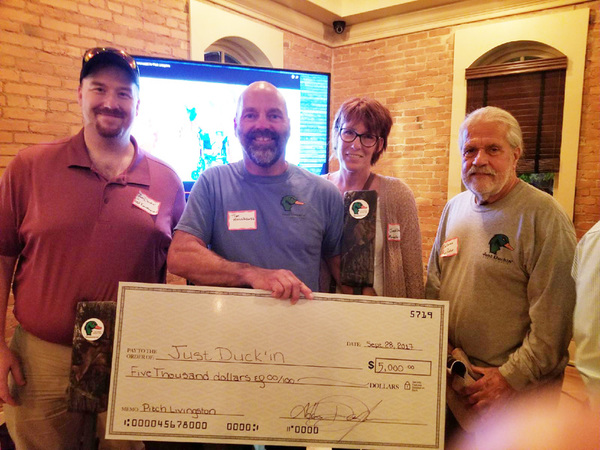 One local resident is “getting all of his ducks in a row” as he takes his invention to the next level.

Tom Kinczkowski of Brighton and the creator of Just Duckin Huntin Chairs was named the winner at Thursday’s Pitch Livingston competition. The first annual event brought five Livingston County entrepreneurs together at Brewery Becker to pitch their business ideas to a panel of judges.

Kinczkowski’s company builds comfortable chairs for duck hunters, allowing them to remain in their blinds for longer periods of time. After receiving encouragement from a friend, Kinczkowski began making the chairs in his garage using steel to support the back rest and paddle. That led to selling them at hunting shows and expos.

The competition’s winner was chosen based on a points system that included elements like the idea’s marketability, originality, and practicality. Judge Adrienne Kanack says she enjoyed getting to know the entrepreneurs and was drawn to Kinczkowski’s business plan, as well as his desire to keep manufacturing the product in Livingston County.

Kinczkowski received $5,000 as the grand prize, which he says he plans to use for product marketing purposes, after treating those who helped him along the way to a nice dinner. Other ideas pitched at the event included organic protein bars, an online giving platform, a system to empty RV holding tanks, and a drum BBQ smoker. (DK)