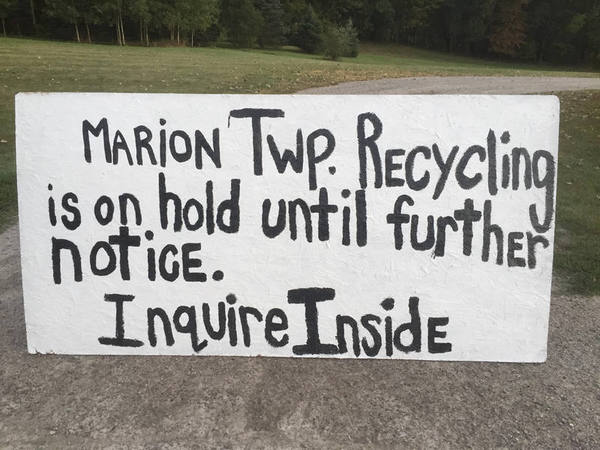 A popular customer service is returning to Marion Township.

The Board of Trustees struggled with the decision on how necessary it is for the recycling service that had been suspended since early summer be reinstated. At Thursday’s meeting, they voted 4-3 in favor of offering recycling once again at the township hall, this time by Alchin’s Disposal. Supervisor Bob Hanvey and Clerk Tammy Beal said they have received more than 60 calls from residents asking about the service coming back. Supervisor Bob Hanvey voted in favor of the motion, but said that there were some valid concerns to be on the lookout for.

The Board discussed options at making sure that only Marion Township residents use the bins. Signs threatening fines and prosecution, sign-in sheets, and random check-ins on who was dumping were all suggested, but nothing was solidified. Hanvey said the issue was that with their previous hauler, Western Washtenaw, they paid a flat rate, so it didn’t matter as much where the recyclables were coming from.

A hike in their rates caused the township to switch service providers, but the succeeding provider’s unfortunate death left the township with the current absence of service. With Alchin’s, the township and its residents will pay $460 a week for 2 pickups, with another $230 on top if a third disposal is needed. Hanvey said he expects the bins and service to start up again in one month’s time. (MK)