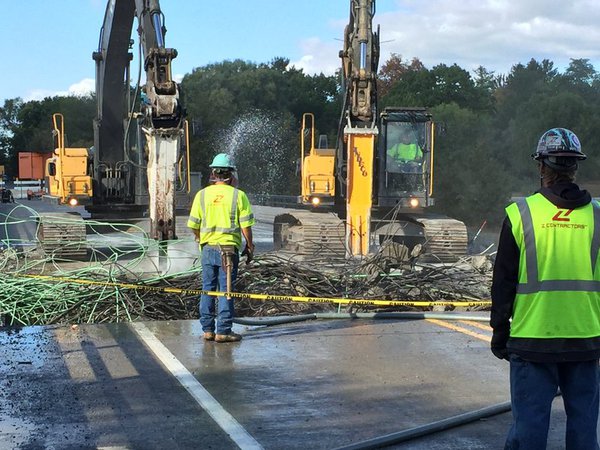 All lanes of I-96 have reopened after bulldozers and other heavy equipment were used to demolish the Pleasant Valley Road bridge over eastbound I-96 in Brighton Township.

Area motorists have dealt with two days of traffic problems and backups after a flatbed semi hauling several boom lifts crashed into the overpass Wednesday afternoon. Michigan Department of Transportation Spokeswoman Kari Arend says four of the six bridge beams were damaged severely enough that inspectors and engineers determined for safety reasons, the eastbound span needed to be removed before they could safely re-open eastbound I-96. After working through the night, MDOT was able to reopen all of the lanes at about 4am, an hour ahead of schedule.

Information has not been released about the at-fault driver but Arend says the trucking company will be held responsible for damage. She tells WHMI MDOT does have a process in place where they will be working through the trucking company’s insurance company to recoup the costs of both the demolition and traffic control, and eventually the rebuild of the bridge.

As for Pleasant Valley Road, Arend says they’re anticipating it will be closed for as long as six months, depending how quickly they can get the bridge rebuilt. Arend says demolishing the span was the main priority to get I-96 back open to traffic, and then they’ll work on a plan to re-open Pleasant Valley Road.