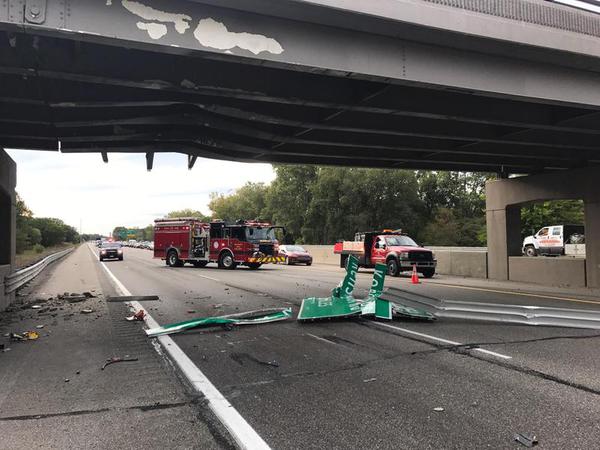 More traffic issues are anticipated this morning after a flatbed semi struck an overpass on I-96, snarling the Wednesday afternoon drive and evening commute.

The incident was reported around 4:45pm and shut down all three lanes of I-96, which remain closed as of this morning, with traffic only getting by on the shoulder. The flatbed hauling three boom lifts failed to clear the overpass, damaging the Pleasant Valley Road bridge. Bridge engineers with the Michigan Department of Transportation were on scene to assess the damage, which appeared to be significant. They plan to demolish the half of the bridge that was damaged, with work beginning as soon as this afternoon. MDOT says they hope to have the freeway reopened later in the day, but are not yet sure how the work will affect the evening rush hour.

Pleasant Valley over I-96 will be closed until permanent repairs can be made and portions of the bridge will be demolished over the next 96 hours. Officials say drivers are advised to find an alternate route for rush hour.

One possible detour to get around the issue appears to be the Grand River exit in Brighton, and then have motorists travel down to Pleasant Valley or Kensington Road to get back on the freeway. However, southbound Pleasant Valley traffic will not be able to get on the eastbound ramp. Officials advise motorists to expect heavy congestion in the City of Brighton as well as Green Oak and Brighton townships. Photo: BAFA. (JM)