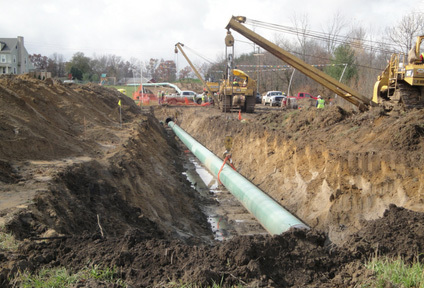 A rally is scheduled this weekend to help stop pipeline from bisecting all potential escape routes near a popular Dexter Township lake.

The Michigan Residents Against the ET Rover Pipeline are calling all hands on deck to show their displeasure with the natural gas pipeline and the path it is taking through Washtenaw and Livingston Counties. They are inviting everyone concerned to join them at the YMCA’s Camp Birkett on Silver Lake, this Saturday from 2pm until 4pm.

The group claims that in the event of a disaster, the blast would be 2,200 feet in diameter and create an incineration zone that is 1.3 miles wide. At its nearest distance, the Rover Pipeline comes within 300 feet of Camp Birkett. Campers, counsellors, and 2,000 residents could become trapped, or worse, between explosion and the lake with no clear road out.

The Residents hope that by showing great numbers they can send a message to elected officials and the Federal Energy Regulatory Commission that putting children, the community, and the natural environment in harm’s way is unacceptable. Camp Birkett is located at 9141 Dexter Townhall Road, in Pinckney. (MK)