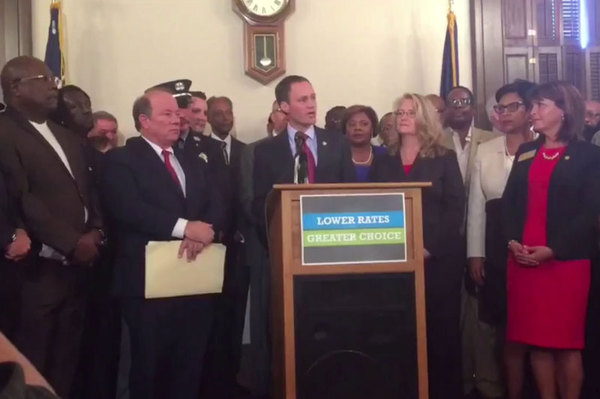 Another plan was unveiled Tuesday by a different group of lawmakers and stakeholders that they maintain would eliminate Michigan’s auto no-fault law and institute reforms to lower the high cost of premiums.

Michigan drivers would no longer be required to buy unlimited medical insurance benefits to cover their injuries in case they were seriously injured in a crash under legislation aimed at lowering the state's high auto premiums. The legislation to reform Michigan’s auto no-fault insurance laws is sponsored by Republican State Representative Lana Theis of Brighton Township, who chairs the House Insurance Committee. The bill is backed by Republican House Speaker Tom Leonard, Detroit Mayor Mike Duggan and others trying to reduce premiums that are highest in the country, saying something must be done because motorists cannot afford insurance.

Michigan is the only state to mandate unlimited benefits. The plan unveiled Tuesday would let motorists stick with unlimited coverage or instead buy either $250,000 or $500,000 of coverage. Auto insurers would be required to cut rates for people selecting $250,000 in coverage. The measure would subject auto insurers to a fee schedule for health services, similarly to how health insurers' reimbursements to providers are lower for Medicare patients.

Critics such as hospitals and plaintiffs' attorneys oppose the bill introduced Tuesday, saying it is bad for injured people. Among those is also Oakland County Executive L. Brooks Patterson, who says the plan is a false promise that offers no guarantee of reductions. He was seriously injured in a 2012 car crash and referred to the plan as “The greatest robbery since the Great Train Robbery in 1855. And behind the curtain today will be smiling conductors on the train: the auto insurance providers”.

Patterson called the proposal a “fraud” and says he hopes voters don’t fall for it, telling WHMI it “reeks of conflict of interest”. The Michigan Insurance Coalition, which represents the state’s largest auto insurers, contributed $80,000 last fall to the Leading Michigan Forward Fund, an “administrative fund” run by Sam Theis, Lana’s husband. When the committee chair’s husband picks up $80,000, Patterson said of course that would get her attention and while Theis might say it hasn’t and it won’t, he thinks everyone knows different. He noted past proposals put before voters to drop or restrict auto no-fault were turned down and the plan represents the most egregious money grab by the insurance industry in decades and would shift cost to taxpayers.

Representative Theis maintains the plan would provide “affordability, flexibility and freedom for Michigan motorists”. She says the committee is seriously looking at next week to meet but no specific date has been set and they need to make sure they’re accommodating new ideas – whatever they can do to lower rates as fast as possible. Theis says it’s time to let individuals and families choose their own coverage level to bring rates down and she hopes to quickly get started debating the legislation in her committee. Theis says Michigan has the highest auto rates in the country and that’s one thing you don’t want to be number one at. She says they need to examine what’s being done different elsewhere around the country and what can they get across party lines to get passed here to actually result in real rate reforms while protecting promises already made. Theis says they’ve got to be willing to put that on the table and she is.

Meanwhile, State Representative Hank Vaupel also serves on the Insurance Committee and announced that he supports legislation announced Tuesday. The Handy Township Republican said it’s high time they bring some common sense to Michigan’s no-fault auto insurance system and the plan would provide drivers with flexibility to choose plans that work best for them and what they can afford.

A link to the state press release detailing the new plan is provided. The press release issued by Patterson's office as well as one from Rep. Vaupel are both attached. (JM)