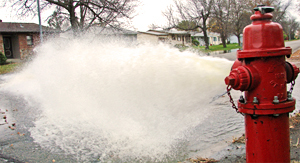 The city will be flushing fire hydrants between 7 a.m. and 3:30 p.m. Tuesday through Friday of this week. In addition, the city's utilities dept. will also be flushing the hydrants on Tuesday from midnight to 6 a.m. The procedure will affect city customers as well as residents of Genoa Twp. who get city water.

Utilities Director Tim Krugh says that flushing the hydrants may cause some discoloration in the water system after the flushing procedure as well as the next day. Customers may also experience a temporary drop in water pressure. Krugh is asking that residents not wash white or light colored clothes during the flushing period.

Anyone experiencing discoloration and rust particles in their water is advised to run their cold water faucets for about 10 minutes. Those still with discolored water are asked to turn off the faucet and repeat the previous step an hour later. Residents who continue to have discolored water are advised to call Krugh or e-mail him by following the prompts on the city’s website of brightoncity.org. (TT)