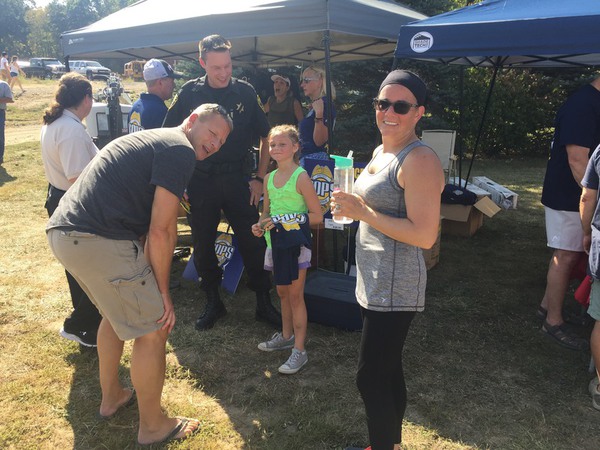 A citizen-led picnic in Tyrone Township was a showing of gratitude for the police officers who protect their communities.

Herman Ferguson’s life was altered forever by the kindness of an officer during a trying ordeal when he was a child. Growing tired of anti-police sentiment in recent years, he founded the organization “Concern Over Police Safety.” Yesterday at Wind Walker Farms, Ferguson held the 2nd Annual Police Appreciation Picnic. Ferguson called the police officers his heroes, and that while “they thank me for what I’m doing here, I want to thank them for doing so much every day.” Ferguson said that for many people, their first interaction with a police officer is a negative one, like being pulled over in a traffic stop. The picnic was an opportunity to give community members a chance to meet officers under positive conditions and encourage discussion between each other.

Linden Police Chief Scott Sutter appreciated the opportunity to meet with residents and said, “A lot of times we see negativity in the media, but what we see on the street is completely different. The citizens of the community really do support us…and you can see it here, today.”

Livingston County Undersheriff Jeff Warder said, “We definitely appreciate the support. It’s amazing that someone took the time to do this for us, believe me, it does not go unnoticed. We really, really appreciate it.”


Resident Jordan Haines of Fenton thought this was a worthy cause for getting out of the house and beating the heat. She said, “it’s really sentimental to meet and be around and show the people that protect us and help us when we need it a lot of gratitude. I think it means a lot to them.”

Attendees were treated to hot dogs and pizza. There were bounce houses, a giant inflatable slide, face painting, live music and fireworks. At 4 o’clock, the national anthem was played with a flyover from a police helicopter out of Flint Bishop Airport. Officers from the state police and the Livingston and Genessee County Sheriff’s Offices were present, along with police from Indiana, Ohio, and Pennsylvania. All in all 27 total jurisdictions came to the event. (MK)