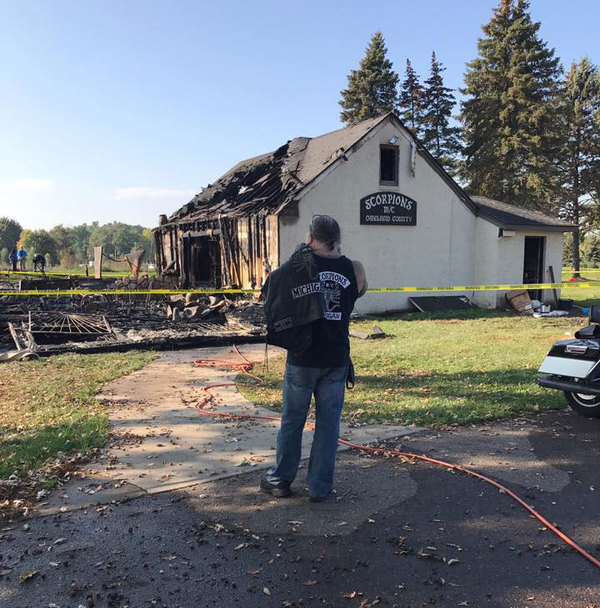 A barn that housed the Scorpions Motorcycle Club in Lyon Township is considered a total loss following a morning fire.

It's the second Detroit-area motorcycle club damaged this week. The Street Royalty Motorcycle Club building on Detroit's west side was destroyed Wednesday by an explosion and fire. The Lyon Township fire forced a closure of Milford Road between 11 and 12 Mile roads this morning as firefighters put out the blaze. One suffered minor injuries. The Oakland County Sheriff’s Office Lyon Township substation is investigating and the fire has been deemed suspicious.

A mini-excavator, like a Bobcat, was used to break into the building to steal a safe. An excavator was stolen from the nearby Michigan War Dog Memorial that was being used to install a fence. The front of the building was preserved but the clubhouse area was destroyed, and it’s considered a total loss.

The Scorpion Club’s Chapter President Chris Page (pictured) said the worst of the losses were the ashes and memorabilia of deceased members. He commented on Facebook that the some media outlets were trying to spin the fire as a gang war but that is not the case, and the two clubs are friends. He says someone stole a skidster, tried to break through the wall to get the safe but could not, so they set it on fire.

The ATF is also investigating both the Detroit and Lyon Township club fires. Facebook photo. (JM)