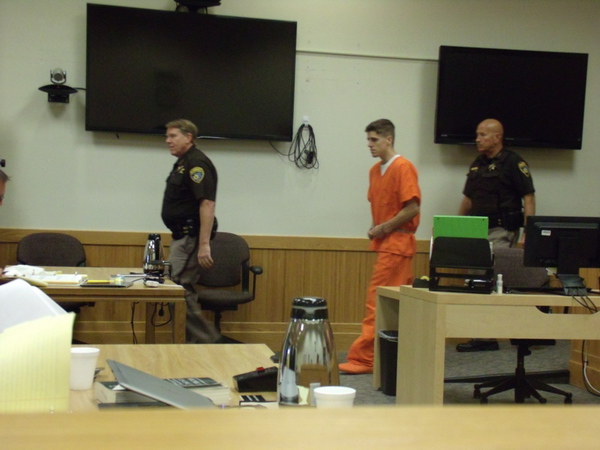 A hearing in the case against a Fenton man charged with driving drunk and killing five people in a fiery crash included testimony in 53rd District Court yesterday.

The May 9th incident, which occurred at the intersection of Argentine Road and M-59 in Oceola Township, resulted in 19 felony counts against 21-year-old Matthew Jordan Carrier. Authorities say Carrier had a BAC of .15 and was driving over 100mph down Argentine Road when he ran a stop sign at the intersection and hit a Cadillac headed east on M-59. The crash killed two passengers in the vehicle driven by Carrier and three passengers in the Cadillac.

At Thursday’s hearing, testimony was given to determine whether there was enough evidence to send Carrier’s case to trial. One of the individuals who testified was Albert Boswell, the driver of the Cadillac and the only survivor in that vehicle. Boswell said he did not have time to brake, as Carrier’s vehicle appeared to come from out of nowhere. Boswell described crawling out of the wrecked car after the impact and calling out to his girlfriend Candice Dunn and her mother Linda Hurley. He tearfully remembered hearing no response from either of them or Hurley’s boyfriend, Jerome Tortomasi.

Testimony also came from Hartland Township resident Edward Beatty, who saw the crash happen, pulled over, and immediately ran to help. Beatty pulled Carrier out from under the vehicle just before it exploded and attempted to comfort him until help came. Beatty stated that while talking with Carrier, he noticed the smell of alcohol on his breath.

Other testimony was provided by some of the emergency responders first to arrive on scene, all of whom stated that Carrier did name himself as the driver. Michigan State Police Trooper Christopher McIntosh told the court about his interview with Carrier on May 15th. McIntosh says Carrier admitted he and his friends had been drinking at a bonfire prior to the crash, but that his friends were either too drunk to operate a vehicle or didn’t know how to drive the Subaru because it was a stick shift. McIntosh says Carrier told him he “felt he was doing the right thing” by driving, despite also being under the influence and having a suspended license as the result of a previous conviction for operating while impaired by liquor.


Following testimony, Judge Suzanne Geddis said Carrier’s actions prior to the crash were an obvious disregard of the possible consequences and gave proof to malicious intent. She bound Carrier over for trial and he waived his Circuit Court arraignment. Future court dates have not been set at this time. (DK)