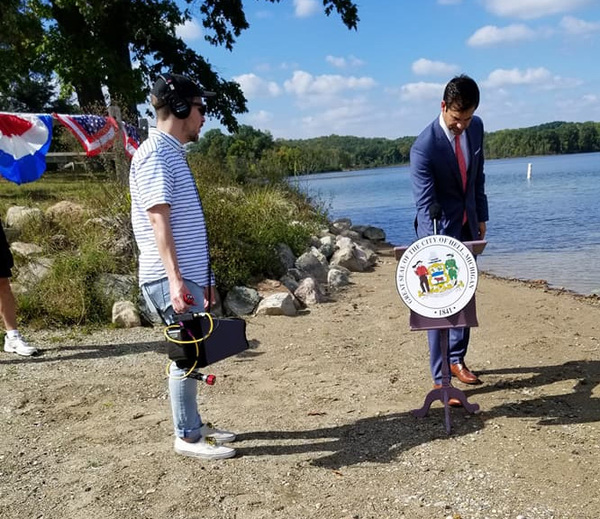 It’s official; The Daily Show is going to Hell. Or more accurately it has already been there.

Ann Arbor native Michael Kosta is the newest correspondent for The Daily Show and brought a crew Wednesday to the tiny Putnam Township hamlet to film a segment for the Comedy Central program. Kosta had himself appointed as the mayor of Hell and shot several scenes beside Silver Lake in the nearby Pinckney State Recreation Area. Kosta reportedly used his temporary powers to declare the lake as Silver Ocean. Local community members from Michigan Residents Against the ET Rover pipeline were also present, letting Kosta know that Silver Ocean was actually “entrapped by a 42 inch pipeline," referring to their ongoing opposition to a natural gas pipeline being built nearby.

Then, as people have done for years, Kosta purchased a square inch of Hell for $1 from the unofficial Mayor of Hell, businessman John Colone. Colone has been trying for more than two years to sell his portion of Hell, a five-acre parcel which includes Screams Ice Cream Parlor, a miniature golf course and wedding chapel. The current asking price of $900,000 would also include the rights to merchandise and marketing. At the conclusion of the Daily Show taping, Colone used his powers to impeach Kosta. It’s not known when the episode featuring Hell will air. (JK)