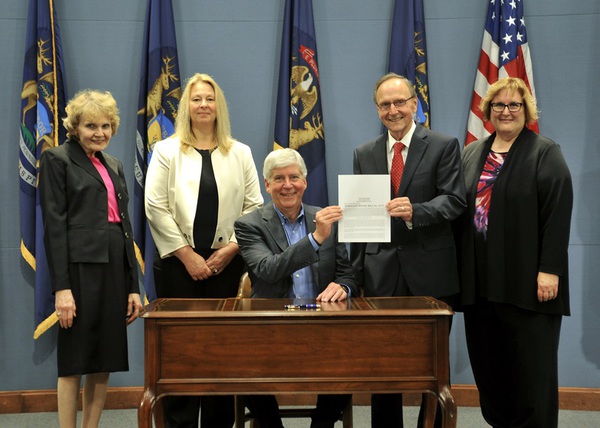 Governor Rick Snyder has a signed a bill spearheaded by local officials to remove iconography from ballots.

Livingston County Clerk Elizabeth Hundley and retired Elections Coordinator Joan Runyon were joined by State Representative Hank Vaupel of Handy Township for a ceremonial bill signing this past Tuesday in Lansing. Vaupel said it was a grassroots, workhorse effort by Runyon and the clerk’s association to get the political vignettes, or icons, removed from future ballots. Vignettes began appearing on ballots in Michigan back in the 1890s and were a tool for helping voters identify candidates by their party affiliation. Vaupel said that in current times, they are more of a hindrance than a help. As ballots have become longer and more complex, the size of the pictures has reduced to a point where it has often become difficult to recognize what is being portrayed on them.

The vignettes have caused confusion in the past, as some voters have circled them, believing they were casting a straight-ticket vote. Vaupel said this mistake has caused votes to not count, and that is a serious problem. For residents needing assistance with reading the ballot, each precinct is now required to offer an AutoMARK machine which can read it to them, further rendering the icons unnecessary. The bill takes effect immediately meaning the vignettes will be absent on November ballots.(MK)