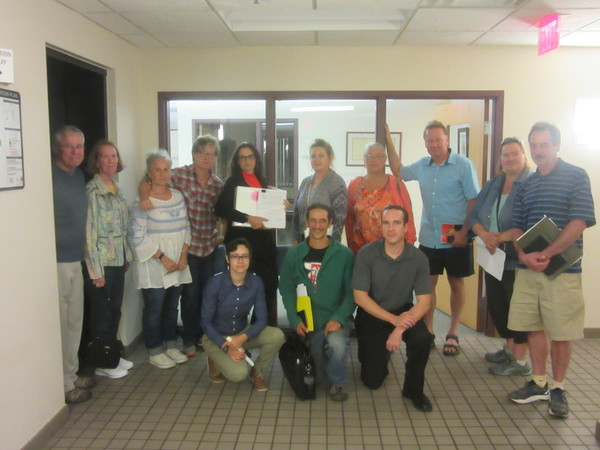 Several residents from both Livingston and Washtenaw County voiced their opinions to the Livingston County’s Board of Commissioners Monday night regarding a natural gas pipeline currently under construction.

17 concerned citizens spoke out against the ET Rover natural gas pipeline, saying it would adversely affect their homes and communities. The 42-inch diameter pipeline would carry 3.25 billion cubic feet of natural gas per day up from Ohio, where it would cross Lenawee, Washtenaw, and Livingston counties before joining the Vector Pipeline in Fowlerville. Pinckney resident Clifford Rowley of the citizen’s group ET Go Home said they hoped to educate commissioners on the safety issues the pipeline represented.

The group presented a copy of a resolution (attached below) from Washtenaw County asking ET Rover to use their original route that would avoid sensitive areas such as Silver Lake in Dexter Township, to odorize the gas for safety purposes and urging the Army Corps of Engineers to revoke ET Rover’s authorization to construct the pipeline and instead require individual permits for each water body crossing for the length of the pipeline.

None of the commissioners commented on the resolution during the meeting, although District 6 Commissioner Bob Bezotte said afterward while preventing the pipeline is practically impossible, he wants to get involved in assuring the safest precautions are taking place and that he intends on attending any upcoming public hearings involving ET Rover. Bezotte claims he feels the pipeline can prove to be positive for Michigan’s economic and job growth if done properly and safely. (DF/JK)