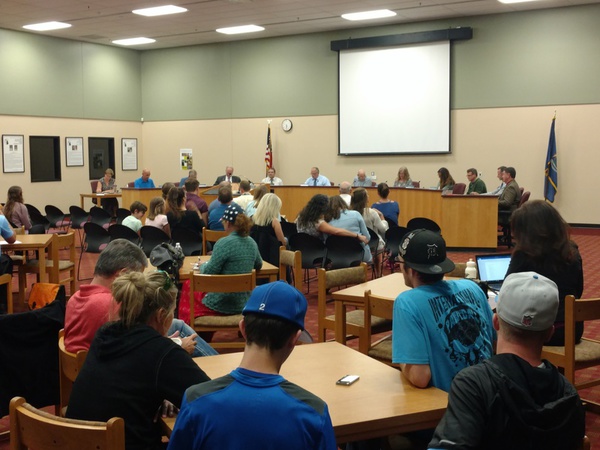 The Hartland Board of Education commended some students for their professionalism and leadership in making sure the tragic events of 9-11 are never forgotten.

Some students were not happy about a missed moment of silence on September 11th and felt it sent the wrong message. The district typically has a moment of silence every year to remember the attacks but did not last Monday. There is no official policy in place to do so and students were encouraged to remember it themselves or in history class. That didn’t sit well with some, including Hartland High School junior Emilio Horvath. He circulated a petition seeking to reinstate the moment of silence in future years, which was presented during Monday night’s board meeting.

Horvath told WHMI he was very happy with all of the support from the student body and others, but also that administrators were willing to work with him to come to a good resolution. Horvath explained he didn’t mean to insinuate that Hartland was not patriotic or cause problems, he just felt it was important to make sure the events are not forgotten. A resolution was reached and those students who want to commemorate 9-11 can meet together next year and in years to come others to remember it as a group, which Horvath says should be more memorable and heartfelt than having a school-wide moment of silence for those don’t want to take part.

Superintendent Chuck Hughes and board members stressed no disrespect was ever intended. President Thom Dumond commented he was impressed Horvath spoke up and it’s great to see that the next generation is carrying on and remembering people who no longer have voices. Board Treasurer Bill Gatewood said he felt the situation and how it was handled served as a great lesson in leadership. Gatewood felt it was the perfect outcome - there was something that needed to be brought up, it was addressed and a great resolution was reached without creating unnecessary drama. Others stated both the district and students handled themselves well and it served as a good civics lesson that sets an example for other students.

There were roughly 55 people in the audience including staff and parents but only three students spoke during call the public, along with Assistant High School Principal Jason Reck who detailed the importance of 9-11 to him, having been involved in the service and deployed to Afghanistan. (JM)