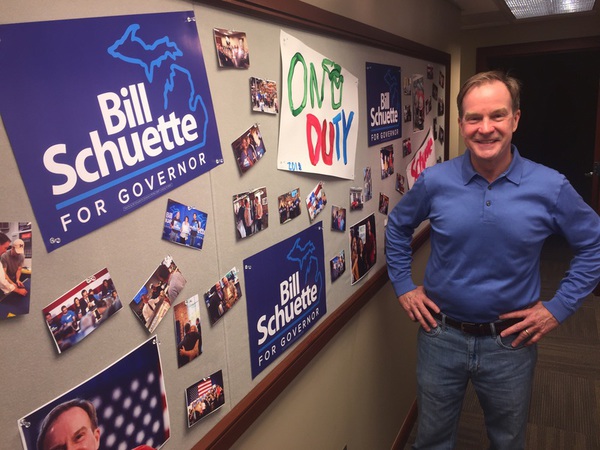 Michigan’s Attorney General Bill Schuette has opened an office in Brighton, just a few days after announcing he will be running in the 2018 governor’s race.

The office, located on East Grand River west of Church Street, officially opened Saturday with a meet and greet session. Schuette tells WHMI he expects to win the primary and general election, and believes Livingston County will be a part of the bridge to victory.

The AG says as the fast growing region in the state, Livingston County is a bedrock of activity, growth, and dynamism. He says he feels honored to be in the middle of that. He also stated the county will play a big role in the primary election because he believes it is a “strong, well-organized, Republican county.”

Schuette announced his bid Tuesday and had already had 29 stops as part of his campaign as of Saturday. He says he wants residents to “cop a new attitude” about Michigan’s future, as he believes the state’s best days are still head. With intentions of becoming a self-proclaimed “jobs governor”, he wants to focus on bringing more people, paychecks, and growth to the area.

Speaking to the income tax hike that came in 2007 under former governor Jennifer Granholm, Schuette’s plans include rolling back and officially eliminating the tax. Schuette added he wants to “…put a dagger through the heart of the legacy of the lost decade of Jennifer Granholm.” Schuette also plans on working to lower auto-insurance rates, which are the highest in the country and approximately $1,000 higher than the national average. Schuette finished by saying he will also crack down on insurance fraud, fight frivolous lawsuits, and pass real auto-insurance reform. (DK)