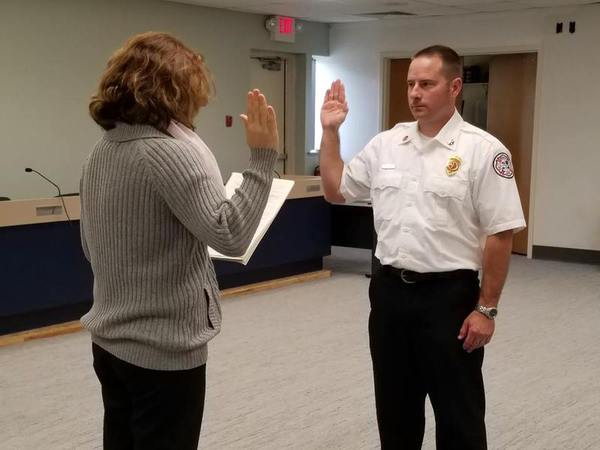 The Brighton Area Fire Authority has sworn in a new Fire Marshal.

Former Captain Rick Boisvert was sworn in during a ceremony on Monday. A former Firefighter of the Year, Boisvert brings more than a decade’s experience within the department to the job. Fire Chief Mike O’Brian believes he will be a valuable asset in his new role, saying he brings a lot of knowledge and experience to the position. He said he knows Boisvert will continue to work as a resource to the community and that they expect him to be a valuable asset when dealing with not only fire code issues in new construction development, local planners, and planning commissions, but also with residents. The Chief stated that he believes Boisvert will do a great job leading and educating the community with everything including open burning, smoke alarms, how long fire extinguishers should be kept, and more.

The Fire Marshal position within the Brighton Area Fire Authority had been open and not filled in recent years. O’Brian said that Deputy Chief Mike Evans had been doing double duty with the Fire Marshal’s responsibilities, but at O’Brian’s request the Fire Authority Board began looking into finding a full time Fire Marshal two months ago. The Authority received applications from as far away as Florida, from within Michigan, and 3 who were qualified from their own department. O’Brian said that as a Chief seeing his staff rise to the top made him proud and showed the caliber of firefighters they have protecting the community. Photo- City of Brighton (MK)