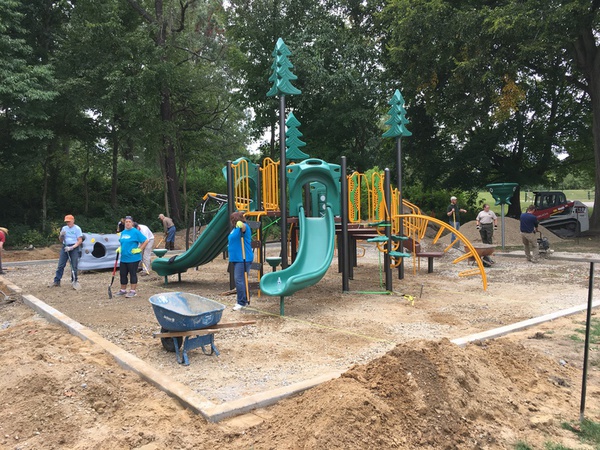 A new playground is up at a local recreation area.

20 volunteers took part in last week’s community build project at the Island lake State Recreation Area. Community members and volunteers from various groups took part in the project, which is a partnership between the Michigan Department of Natural Resources and Michigan-based Carter’s Kids. The non-profit has a mission to invest in sustainable, social, physical and cognitive development for children through the creation of playgrounds.

Prep work was done and the new playground equipment was put in the ground last week at Kent Lake Beach, which Island Lake Unit Manager Andrew Haapala says is where most family picnickers go but it also plays host to the South Lyon Area Recreation Authority’s day camp in the summer. He tells WHMI the playground is targeting kids age 5 to 12 but the intention for the future is to add on an option for smaller children.

Haapala says they have a very passionate Friends group whose goal was to build a playground. He says outdated playground equipment at the park had been removed over the years but due to minimal funding, it tends to take a while for them to be replaced at state parks. Haapala says the new playground will be available for the more than one million annual park visitors to the park to enjoy, providing a safe place for children to play and be healthy.

The Grand Opening Ribbon Cutting for the Island Lake Community Built Playground will be Friday September 22nd at 11:30am. Members from the Friends of Island Lake, Carter’s Kids, South Lyon Area Recreation Authority, Michigan Department of Natural Resources, Sinclair Recreation and Chemical Bank Foundation will be onsite to welcome families to enjoy the new feature of the park. (JM)