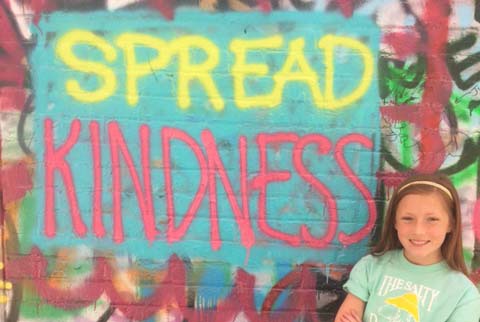 A local fifth-grader’s idea for kids to be more inclusive has resulted in a major corporate donation to expand the effort.

At Monday’s Brighton Board of Education meeting, 10-year-old Charlotte Mandziuk of Maltby Intermediate School was able to present a $10,000 check from Toys ‘R Us to help expand the program she created to make playgrounds more welcoming. Called Recess K.L.U.B, or Kindness and Leadership Uniting Buddies, Charlotte says the idea came about several years ago when she heard her older sister upset at having to spend recess by herself because her friends would separate into groups that she didn’t belong to. Because she idolized her sister, Charlotte says she couldn’t understand why no one wanted to play with her. That’s when she came up with the idea to start a club to make sure everyone had someone to play with at recess.

Using a video she made to recruit other students, the club began to attract kids of all ages who would lead activities to include everyone and make sure no one was left by themselves during recess. After witnessing the positive impact it was having, Charlotte auditioned the program in the Toys ‘R Us “President of Play” competition, and while she didn’t win, it caught the attention of company executives, who recently gave $10,000 to expand the program to the entire district.

The money will be used to purchase equipment for each of the district’s playgrounds, including a “meet up spot” bench and a plaque. You can find more details about the program through their Facebook page, and a link is posted below. (JK)