Still Without A Contract, Crowd Voices Support For Fowlerville Teachers 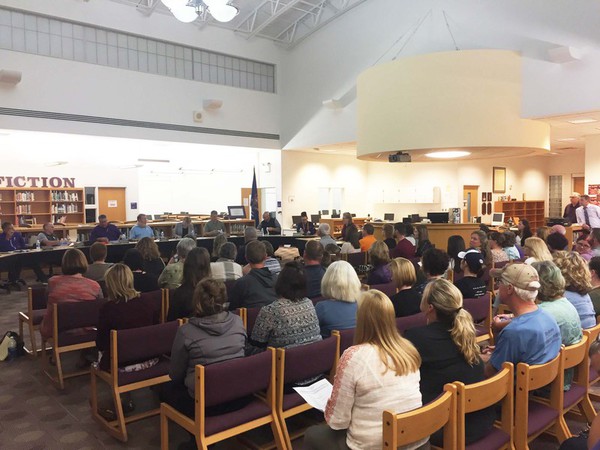 A new contract has yet to be negotiated for teachers in Fowlerville Community Schools.

President of the Fowlerville Education Association and 6th grade teacher Carrie DeLuca says the FEA has put forth a proposal, which was discussed by the Board of Education in a closed session Tuesday night. DeLuca says the district was the first in the county to begin negotiations and teachers are feeling defeated to still be without a contract a week and a half into the school year. Teacher contracts are typically negotiated and approved by early summer. DeLuca says even deficit districts in Livingston County have contracts in place, making Fowlerville’s teachers feel underappreciated.

The board of education’s Tuesday meeting was attended by over 100 people and most had come to speak to the issue. During public comment, several teachers voiced the idea that how the district values them is reflected in a contract or lack thereof. One teacher stated that she is “personally insulted by the breadcrumbs” that are being offered by the administration. The district’s teachers took a pay freeze several years ago following the recession and have yet to make their way back to ground zero, according to Bill Vliek, the high schools’ choir and band director. DeLuca says in the 2016-2017 school year, teachers’ pay was only 53% of the district’s general revenue.

Parents looking to back teachers shared their experiences of Fowlerville’s educators making a positive impact on their child. Melynie Culbertson and her family live in Webberville. She is a parent of two students in the district and says she and her husband drive their kids to school every day just so they can go to Fowlerville Schools. She says the daily trip is worth it. Culbertson's son has Asperger's and ADHD, yet she says he has "flourished" thanks to the district's teachers. Culbertson also mentioned that her daughter had been bullied last year, but the situation was quickly rectified by a caring teacher.

Christine Haan, a parent who frequently volunteers in the district, says she speaks for all parents when she says they stand behind their teachers. Haan says while recent infrastructure improvements are nice, they won't matter if there aren't any teachers inside the buildings. Parent Jennifer Arledge-Teran questioned the board's transparency in terms of finances. She feels administration is not forthcoming and wants to know how money is being allocated in the district. Arledge-Teran says, "...these teachers deserve everything."

DeLuca says teachers support the recent infrastructure improvements, but feels there needs to be a balance and that teacher's pay should be top priority. According to DeLuca, the FEA is meeting with the board of education Friday and expects a counter-proposal will be presented at that time. Superintendent Wayne Roedel has declined to comment. (DK)