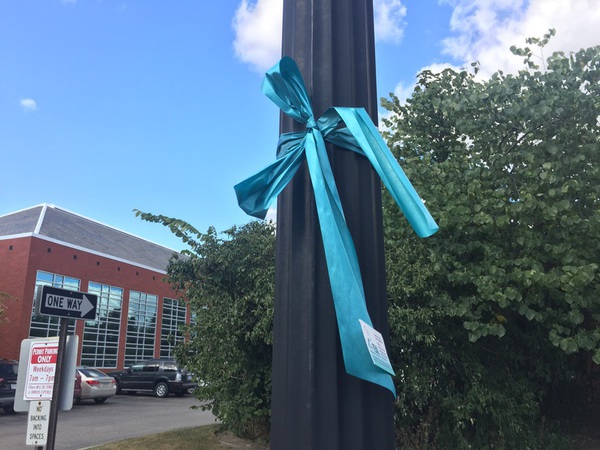 A Livingston County woman is hoping to draw the community’s attention to a type of cancer that is often undetectable until it’s too late.

September is Ovarian Cancer Awareness Month and signified by teal ribbons. The “Tie Michigan Teal” campaign works to inform communities about the disease and its symptoms by catching the public’s eye and attention with the ribbons. Howell resident Maria McEvoy has tied teal ribbons to light posts throughout the cities of Howell and Brighton to promote the campaign.

McEvoy lost her mother to ovarian cancer and says in her honor, she wants to educate women about the risks. Because ovarian cancer is not detectable with testing or screening tools, it’s commonly not diagnosed until it is in a much later stage. McEvoy says ovarian cancer is “very sneaky” because the symptoms are common and easy to dismiss or be attributed to something else. Without an early diagnostic test, McEvoy says it’s imperative that women are informed about what those symptoms are.

In 2017 it is estimated that 22,400 cases of ovarian cancer will be diagnosed and 14,000 women will die because of it. Another lethal factor is that only about 15% of cases are diagnosed in the early stage. McEvoy says it’s usually not diagnosed until stage three or beyond.

In addition to raising awareness with the ribbons, McEvoy says they are a symbol of the women who have lost their battle with ovarian cancer.

You can find more information about the “Tie Michigan Teal” campaign at the link below. (DK)