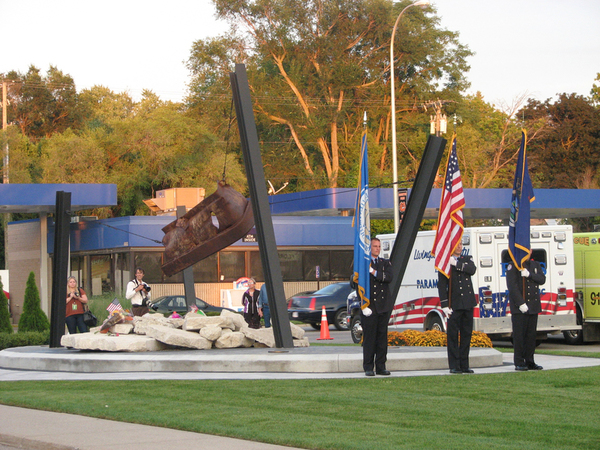 As the community remembers the tragic and heroic events of September 11th, 2001 - a ceremony to pay tribute is planned tonight in Brighton.

The Brighton Area Fire Authority and local public safety agencies will come together to host the annual 9-11 remembrance ceremony at Station 31 on Grand River. The site is also home to a piece of twisted metal from the World Trade Center in New York. The hour long ceremony serves as a way to remember those who died not only at the World Trade Center in New York, but at the Pentagon and in Pennsylvania as well.

Local public safety officials will recap and talk about the events before a wreath laying ceremony, and really strive to remember the events of September 11th. Brighton Fire Chief Mike O’Brian says today might just seem like another day and the media will likely be focused on Hurricane Irma but they want to make sure they never forget and remember the men and women who gave it their all to save somebody else or who died just because of the cowardly attack. O’Brian says a lot of people lost their lives trying to help one another and defend the country but what they hope with the ceremony is that people truly remember what it was like on September 12th.

O’Brian says those who were around on September 11th, 2001 likely remember the horrific events, and the towers and pentagon burning. O’Brian says what he remembers so much out of this absolutely horrific event though is how people came together the next day - they were kinder, opening doors and checking on neighbors. He says what’s also been amazing are the people they’ve gotten to meet over the years because of the memorial at the fire station. O’Brian says they’ve had visits from flight crews, people who were in NYC, relatives of those who lost their lives and he feels it truly speaks to the importance of the day.

The 9-11 ceremony starts at 6:30pm and is open to the entire public. The family-friendly event generally draws a large turnout so those attending should plan on arriving early to give themselves time to find parking. Handicap parking will be available on site. Individuals are encouraged to bring chairs as seating is limited and to dress appropriately, as the ceremony is held outside. In the event of rain, it will be moved inside. (JM)