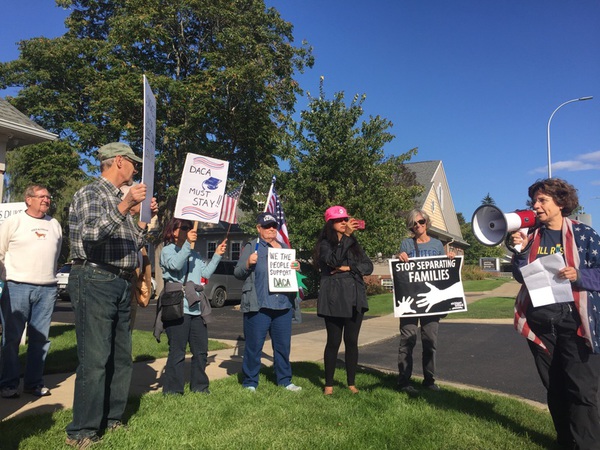 A local grassroots organization’s peaceful protest urged the community and lawmakers to support the continuation of an executive immigration policy that was recently overturned.

Deferred Action for Childhood Arrivals, or DACA, was implemented by President Barack Obama 5 years ago and allowed young adults who immigrated illegally as children with their parents to remain in the country and work. On Tuesday, President Donald Trump ordered an end to DACA within six months.

8th District Congressman Mike Bishop recently issued a statement saying the “previous administration overstepped its bounds with DACA”, but activists are still hoping he’ll support legislation that proponents say will provide a legal pathway to citizenship for DACA recipients. Members of Indivisible Livingston, groups from neighboring counties, and the organization’s allies gathered outside of the Congressman’s Brighton office on Friday for a peaceful demonstration to show their support for DACA.

Emily Duthinh, an active member of the North Oakland Indivisible 8 Team, says a representative from Bishop’s office told her the Congressman is sympathetic to the plight of DACA recipients. Duthinh says if that's the case, he should support legislation providing a pathway to citizenship for them, and "put his vote where his mouth is."

Bishop’s comment on the President’s order stated that Congress “must take a responsible approach that balances compassion and the rule of law.” But Chris Smith says Bishop’s statement lacks clarity. Smith has previously said that he’s considered running against Bishop in next year’s election. He, and several others at Friday’s gathering, say the Congressman’s response was “so brief that it’s difficult to have confidence” in knowing where he stands on the issue. Bishop’s office has not yet responded to those statements. (DK)