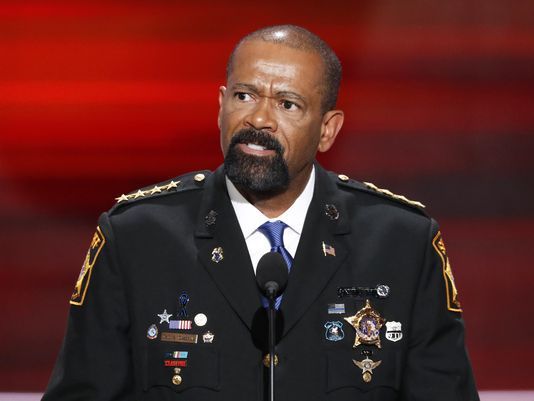 The Livingston County Democratic Party is raising questions about an event featuring a former sheriff they say holds radical views.

Sheriff Mike Murphy will serve as the master of ceremonies during the Livingston County Republican Party’s 2017 Reagan Day dinner. David A. Clarke recently accepted a position as a senior advisor and spokesman for the super PAC America First Action, after resigning from his embattled role of sheriff for Milwaukee County. He is a strong supporter of Donald Trump. His tenure was plagued by controversy and numerous lawsuits being filed alleging abuse and rape in the Milwaukee County Jail.

The deaths of four inmates in six months resulted in a federal investigation. Clarke's department further came under fire for the shackling and use of restraints on pregnant women during labor while incarcerated. After Clarke’s resignation, Democratic Milwaukee Senator Lena Taylor said “After years of abuse at his hands, the people of Milwaukee can sleep soundly tonight”.

Local Democrats say Clarke is a follower of the right-wing fringe theory of the constitutional sheriff, in which all authority within a county lies with the sheriff. In 2013, Clarke was named sheriff of the year by the Constitutional Sheriff’s and Peace Officers Association.

Democratic Party chairwoman Judy Daubenmier says they and county residents question if Murphy shares those extreme views and if he is a member of the association. Daubenmier says his emceeing the event sort of implies he might share some of the views of Clarke or the association and their radical far-right views on the role of a sheriff in America. Daubenmier says by appearing alongside Clarke, Murphy is sending the wrong message about Livingston County and what it stands for, adding she feels he should distance himself from the event.

Murphy tells WHMI his being compared to former sheriff Clarke is frankly, unfair. He says he was asked to emcee the dinner, which is the case with a lot of local events, so being that he is a Republican and the event is hosted by the local party, he agreed. Murphy says he is not responsible for bringing Clarke here and further clarified that he is not a member of the Constitutional Sheriff’s or Peace Officers group.

As to the issue about divisiveness, Murphy noted that he thought a recent unity forum went well that also focused on free speech rights. Murphy said what makes this country great is the opportunity for people to speak their mind. He doesn’t see anything wrong with Clarke coming here and saying whatever he has to say, so long it’s done peacefully. He says where it becomes a problem is when you have people in opposition that try to make it an issue - and he truly hopes that does not happen in this case. He says if someone wants to have an anti-Clarke or anti-Sheriff Murphy campaign or rally somewhere else at that time or another, go for it. Murphy added it is important to have debate and share information, but it needs to be done peacefully and at the appropriate time so violence doesn’t result.

Murphy stressed his job is to represent all citizens in Livingston County – and he would hope people see and understand that by his actions over the last 27 years and during his time as the elected sheriff. Murphy added he feels he has a pretty good understanding of what people in Livingston County want and feels his Office does a good job of delivering that. (JM)