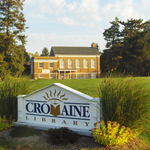 A local library will party all weekend long to celebrate its 90th anniversary later this month, as well as the completion of the building’s new addition.

The Hartland Cromaine District Library is holding its reception Friday, September 29th, from 6:30 to 8:30pm. Library Director Ceci Marlow says guests will be greeted on the first floor with harp music, and a performance from the women’s a capella group Decibelles awaits them on the third floor. The free event includes food and tours of the library’s 3,800 square-foot expansion.

A ribbon cutting to officially open the extension will be held earlier in the day at 9am with the Hartland Area Chamber of Commerce. The renovation and building reconfiguration allowed for the creation of two study rooms, two meeting rooms, and a youth program room. The library will also have a change in hours of operation.

The library was built in 1927 as a gift to the area from J. Robert Crouse, J.B. Crouse and H.A. Tremaine. It was the only public library the community had until 1980. Marlow says many of the values that were held by the library’s donors have continued through present day and serve as the institution’s framework. Marlow says the library looks for opportunities to connect residents to cultural enrichment as it is a part of the institution’s legacy. She feels that effort has been made possible by working with community partners and that the 90th anniversary party will reflect that as well.

But the fun doesn’t end on Friday. On Saturday, September 30th, a family celebration with a concert and free ice cream will be held at the library from 10am to 1pm. More event information can be found at the link below. (DK)