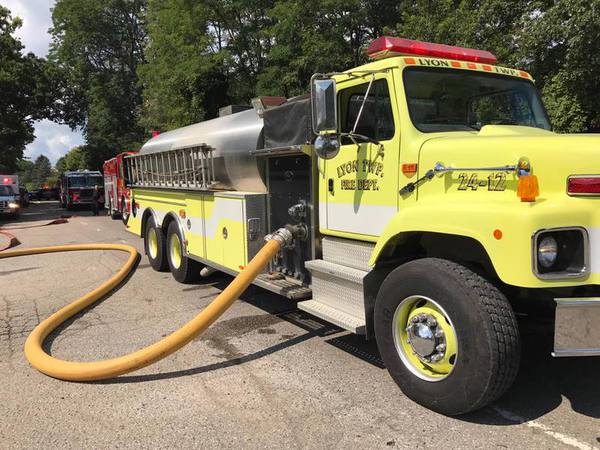 Multiple departments responded to a house fire in Green Oak Township Tuesday afternoon due to a lack of fire hydrants in the area.

The Green Oak Township Fire Department responded shortly before noon to home on Bingham Road near Silver Lake Road for a reported kitchen fire. Fire Chief Kevin Gentry tells WHMI first arriving units were on scene within a minute and found the kitchen to be fully involved in fire, with extension into second floor. He says units extinguished the fire in approximately 25 minutes with assistance from the Brighton and South Lyon Fire Departments. Gentry said the Lyon and Hamburg Township Fire Departments were also called for tankers because the home was located in a non-hydrant area and water had to be trucked in, noting the nearest hydrant was a long way away.

Gentry says there was one person inside of the home when the fire broke out but he was able to escape out of a window. The man was treated at the scene for smoke inhalation and released. No firefighters were injured.

Gentry says the cause is believed to be a cooking fire, related to grease on the stove. He says the home sustained moderate damage. The kitchen was destroyed, with smoke damage elsewhere. Photo: Lyon Township Fire Department - Facebook. (JM)