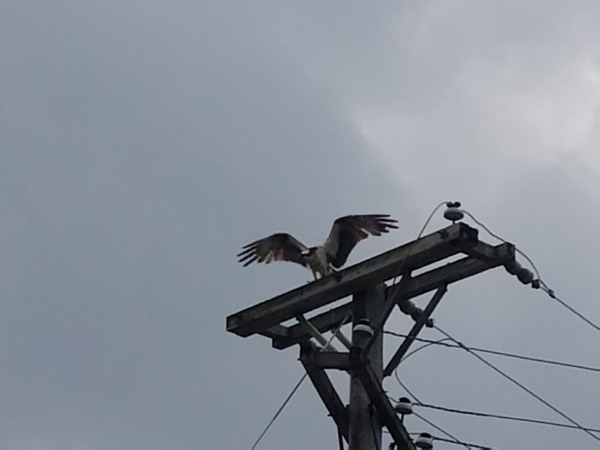 A large nest belonging to a rare predatory bird species in Michigan has been spotted by two business owners in Genoa Township.

Don Matskiw of Sterling Auto Creations and Rick Allard of R&A Tool have been watching uncommonly large avian creatures carry food and nesting materials to the top of a cell phone tower off Dorr Road for two years now. It wasn’t until Allard recently brought in a bird book, that the duo discovered they were looking at the once-threatened osprey species. Allard said its been exciting to grab the binoculars and watch the birds that have a wingspan of up to 6 feet as they just hang out. Mattskiw flew his drone up there last year and discovered the nest taking up what he believes to be nearly ¾ of the cell phone tower platform. He said he has no idea just many osprey are living up there. He said there appears to be at least 2 adults and some babies. The business owners said it’s not uncommon to see the birds carrying fish back to the nest from nearby Lake Chemung. Allard said they aren’t causing a disturbance, but he can often hear them making enough noise to be heard inside his tool shop.

Ospreys were once in danger of being wiped out of Michigan due to the widespread use of the pesticide DDT following World War II. DDT hasn’t been used in over two decades, and efforts to reintroduce the species have been successful. Ospreys were taken off of Michigan’s threatened species list in 2009. The Department of Natural Resources still wants any who observe the bird to contact them and report the location. Mattskiw and Allard emailed the DNR Wednesday morning and are awaiting response. Photo - Don Matskiw (MK)