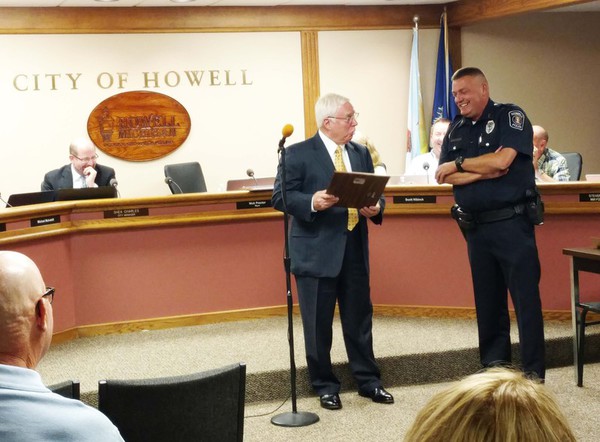 A retiring police officer in the City of Howell was thanked recently for his dedication, loyalty and service.

Officer Gary Mitts was recognized by the Mayor Nick Proctor and the Howell City Council at Monday night’s meeting. Over the course of his career, Mitts received two letters of commendation, two life-saving awards and numerous letters of appreciation from citizens describing him as kind, professional, responsive, caring, understanding and compassionate.
Mitts is retiring after 21 years with the department and officials wished him well. Proctor presented Mitts with the Mayor’s Proclamation in humorous manner, with many jokes and laughs about traffic violations and his time serving as a member of LAWNET or the Livingston and Washtenaw Narcotics Enforcement Team.

Mitts joined the department as a non-sworn reserve officer in 1986 before serving a four year term in U.S. Army. He returned to Howell with reserve officer status in 1990 before becoming a certified officer through the Washtenaw Police Academy. Mitts then continued as a part time officer for another five years in Howell. He simultaneously worked part time with the Fowlerville Police Department before accepting a full time position in November 1996 with the City of Howell.

Howell Police Chief George Basar said the department and fellow officers hate to see Mitts leave but wish him well in his future endeavors, adding the time comes around in everyone’s career where it’s time to move on and enjoy the next chapter in life. A retirement badge will be presented to him at a future date.

After the proclamation presentation, Mitts thanked the citizens of Howell for letting him wear their badge. Mitts said he had no immediate plans for retirement. (JM)