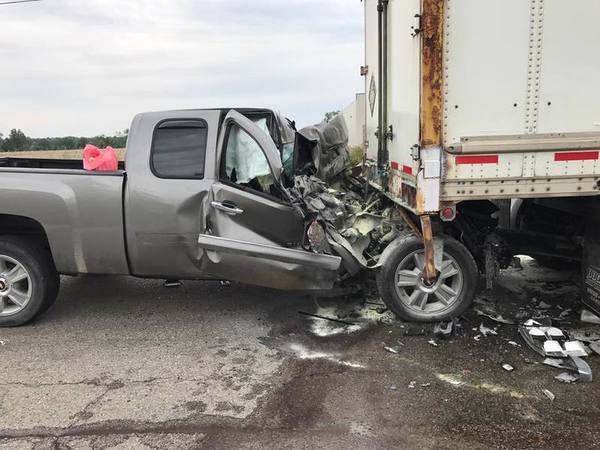 A South Lyon man was airlifted to a hospital in critical condition following a Monday morning crash involving a semi.

Deputies with the Oakland County Sheriff’s Office Crash Reconstruction unit is assisting deputies from the Lyon Township substation in the investigation of what was described as a serious injury, two vehicle crash around 8am at Grand River and South Hill Road. A 26-year-old South Lyon man was traveling westbound on Grand River in a 2013 Chevy Silverado when police say his vehicle rear-ended a stopped, 2002 Freightliner tractor-trailer that was attempting to turn left into a private business.

The Lyon Township Fire Department reported that luckily a Huron Valley Ambulance crew was there when it happened and was able to start patient care before the fire department arrived on scene. The South Lyon man was pinned inside the vehicle and had to be extricated before being airlifted to a hospital in critical condition, where he was to undergo surgery. The driver of the Freightliner, a 46-year-old Redford Township resident, was not injured.

Police say the South Lyon man was not wearing a seat belt and alcohol does not appear to have been a factor. The crash and circumstances remain under investigation. Photo: Lyon Township Fire Department. (JM)