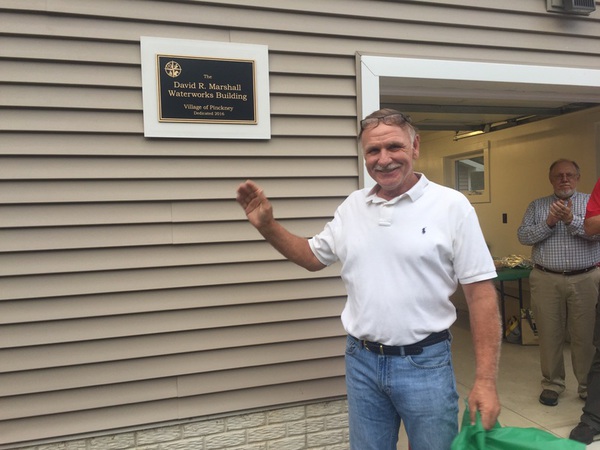 A new building for the Village of Pinckney’s water treatment system has been dedicated to one of the municipality’s longtime employees.

Dave Marshall retired last year as the village’s Department of Public Works Director after over three decades of service. Current DPW Director Scott Mills says before Marshall left, he took action to handle some business he couldn’t leave unfinished. Mills says Marshall knew the village’s water treatment plant was in need of an upgrade because the building was beginning to run out of room, but contractor bids for construction were too high for the municipality to consider.

Marshall used his construction license to work with other contractors to construct the building within the village’s budget. The new structure includes technology that allows the system to be controlled by workers through their cell phones and can measure different variables in the water. It is also said to be much safer for plant workers.

Village President Linda Lavey says officials had originally joked with Marshall about naming the building after him, but later realized they really should.

Marshall was honored by the dedication and reminisced over his 33 years with the village. He says it has been an enjoyable ride that went by so fast, and is very appreciative of all the help he had in making the building come to fruition.

An actual dedication ceremony of the building in Marshall’s name was held Monday night and attended by local officials, community members and Marshall’s family. Lavey says the village is very appreciative of his many years of service and grateful for his final gift. (DK)