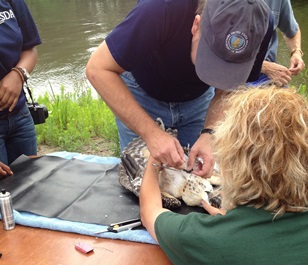 Wildlife biologists are stepping up efforts to monitor ospreys, including those at a local metropark.

The birds of prey had all but disappeared from the area because of pesticide pollution but are coming back. Four osprey chicks were fitted this year with "backpack" GPS units enabling scientists to track the birds' movements and seasonal migration patterns. The chicks were hatched on platforms at Michigan State University's Lux Arbor Reserve in Delton, at Kensington Metropark in Milford and on Fletcher's Pond near Alpena.

Julie Oakes of the state Department of Natural Resources says the units will provide information about dangers that confront migrating ospreys, such as predatory great horned owls. The DNR began relocating ospreys to southern Michigan in 1998. The region now has at least 60 active nests. (JK)