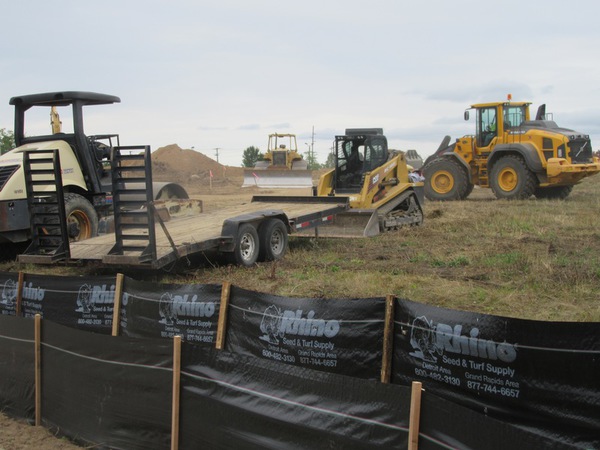 Construction crews began work this week on the new Candlewood Suites, which is going in across Library Drive from the Homewood Suites by Hilton, off Challis Road, in Brighton.

The City Planning Commission approved the latest site plan last October. The developer allowed the original site plan to expire after the economy tanked and re-applied for a new site plan last year. Developer “Mike” Shammami of Brighton Hotels LLC says his reason for reviving the project is that, “The economy is better, it’s more stable.”

Shammami plans on a 3-story, 90-suite hotel. All rooms will be one-or-two-room suites, each with a kitchenette where guests may cook or microwave their meals. Shammami says the hotel will also have a ”mini mart” with canned goods, microwavable foods and snacks available for hotel guests. “It’s geared toward a more extended stay,” he says, and as a result, there will be no cafeteria or continental breakfast. The hotel will have a heated, indoor pool and an “oversize” fitness center. It will also feature an outdoor picnic area for barbecues and a gazebo.

The total project cost is estimated at $9-10 million. Shammami says construction of the new University of Michigan Brighton Health Center South medical complex — which is now under construction — was a “plus” in his company’s plans, but not an overriding factor in the decision to go forward. He says that Vail Inc.’s purchase of the Mount Brighton Ski Area and infusion of $10 million worth of upgrades to that facility was serendipitous, but not a factor in the decision to proceed.

Construction of the Candlewood Suites is just one aspect of what is rapidly becoming a hotel “district” in Brighton. The Hampton Inn & Suites opened in April of this year; construction is set to begin soon on a 4-story Holiday Inn nearby, at Nemco Way and Murphy Drive. As a result, the current Holiday Inn Express and Suites near Grand River and Challis Rd. is going to be “re-badged” and become part of another hotel chain. And the Homewood Suites by Hilton on Challis Road at Library Drive, opened several years ago. That will make five hotels within a 1/2-mile radius in Brighton.

Brighton city officials have said that construction of the new, 297,000-square foot U/M Brighton Health Center South has much to do with the recent hotel construction activity. The $175 million facility is scheduled to be completed in late 2018. (TT)