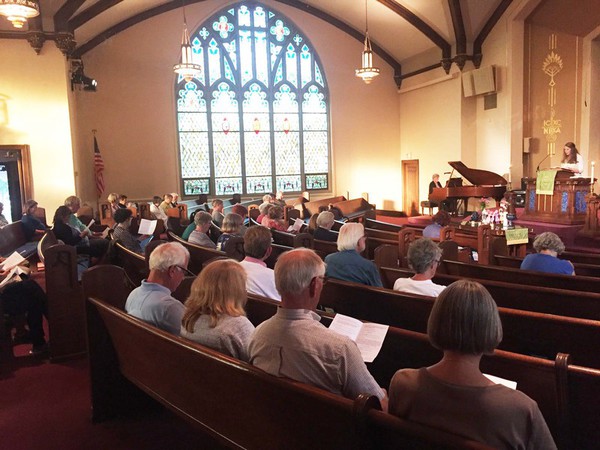 A local church held a service last night aimed at bringing the community together to pray for an end to racism, and reconciliation between races.

Pastor Judith McMillan of the First Presbyterian Church in Howell led the service with encouragement and a strong belief that peace among people can be found with the power of prayer. The event was created by the congregation in a response to the violence and white nationalist rally in Charlottesville, Virginia two weeks ago.

Throughout the service, McMillan addressed hard truths about the prevalence of racism and the need for individuals to respond and stand against acts of hate. She says it is critical not only for members of the church, but for all people, to talk deliberately and openly about racism and unbalanced power.

Though she is from Troy, McMillan is not ignorant to Howell’s reputation of association with the Ku Klux Klan. White Supremacist leader and Michigan Grand Dragon Robert E. Miles moved to the Howell area in the early 1960's, holding cross-burnings on his farm north of town, most prominently in the 70's and 80's, until his death in 1992. Despite that history, McMillan says the area is full of many people who reject his ideas and are actively seeking an end to bigotry, and recounted an incident in 1994 when local clergy and other members of the community held a ceremonial scrubbing of the courthouse steps the day after a KKK rally to demonstrate that hate was not welcome in the community.

McMillan says the congregation hopes to hold similar events in the future by partnering with other local churches and groups. She hopes these services will open hearts and foster inclusion and diversity. Among racism, bigotry, and prejudice, McMillan says there is another sin that all must be aware of and continually fight against: complicit silence. (DK)